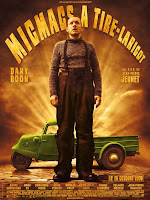 Released in France this week is Jean-Pierre Jeunet's latest visual feast 'Micmacs a Tire-Larigot'. Typically it's an eccentric French comedy choc-full of inventive set-pieces with sublime photography by D.P. Tetsuo Nagata. France's favourite funny-man, Dany Boon, stars as Basil, a video store clerk whose father was killed by a land-mine & is himself inadvertently the victim of a drive by shooting. He survives a bullet lodged in his brain & despite falling homeless and jobless as a result of his injury sets out on a mission to ruin those who manufactered the weapons.


The picture features several animated sequences & wonderful 'live' automatons made from objects found in the junk-yard where Basil finds himself adopted by the eccentric 'family' living underneath. Within Jeunet's ouvre I'd say Micmacs lies somewhere between Delicatessan and Amelie. It's good to see him back with a new film after several years struggling to realise the film version of Yann Martel's Life of Pi.
Posted by Matt Jones at 4:30 pm

The same director of Amélie?

I saw a little bit of scene in front of my favourite place,
Musee d'Orsay ?

Got a chance to see this at TIFF - I really, really enjoyed it. I felt like it was practically an animated film in live action form. Most of the film was basically pantomime with a minimal use of subtitles. I really enjoyed it. Jean Pierre was there to do a q&a, but I didn't get to ask my question about whether he'd ever consider going back to animation after his initial short films (which i'm still desperately seeking) that he did with Marc Caro.

I hope it gets a North American release soon too.

Say Hi to Mr. Pearns for me :) Love your sketches as well.

it's stuff like this that makes me want to move to France.


is that a good translation?

Randeep-shall say hi to Kris for ya sure. Check out Jeunet's website-lots of interesting info there on his shorts, features & abandoned projects.

Mick-yessir, the French really do do everything with class-except rock n roll. Your French is coming on well.