Last weekend's expedition was to the Zoo Parc du Cap-Ferrat which is possibly the smallest & most expensive zoo in the world! We we there on an overcast chilly Sunday so there weren't too many kids & parents harassing us or the animals. The cold meant no time for messing around with watercolours, it was straight down to action with quick pen gesture sketches. 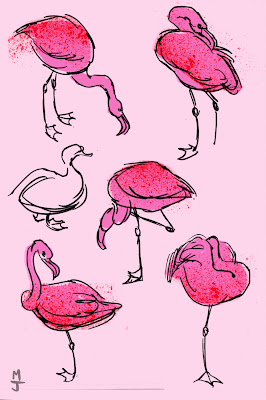 I haven't sketched at a zoo for over a year so I was feeling rusty. I warmed up on the 'easier' creatures-starting with the elegant flamingos. 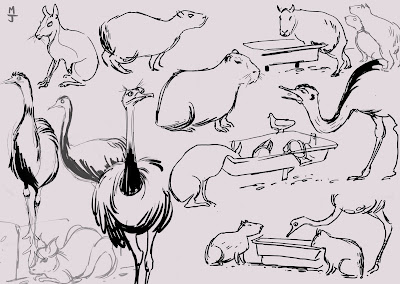 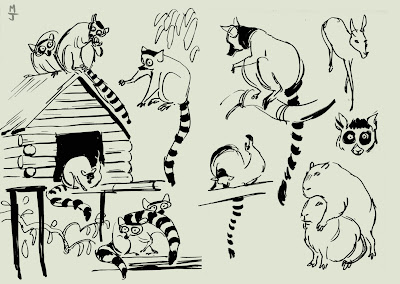 The lemurs always look startled with their huge, black-ringed eyes. The poor ruffed lemurs were so cold they sat with their heads tucked under their legs! 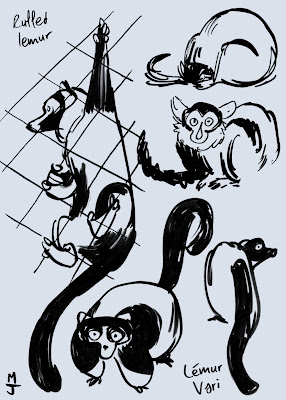 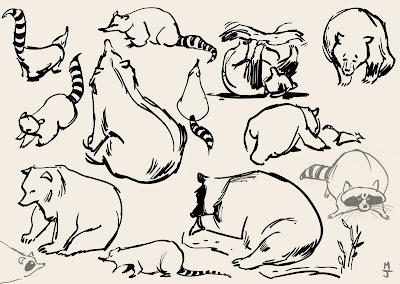 The coatis lead a perilous existence living in the bear pit. There were a couple of raccoons in there too. There were two grumpy black bears who, when not growling at each other, sit up on their backsides & beg for food . 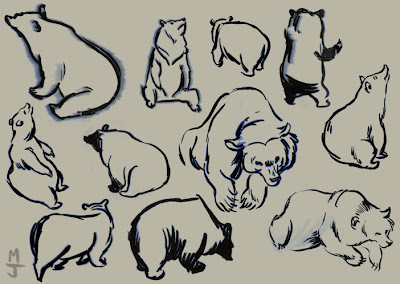 The laid back wallabies were taking it easy, grooming & scratching themselves. 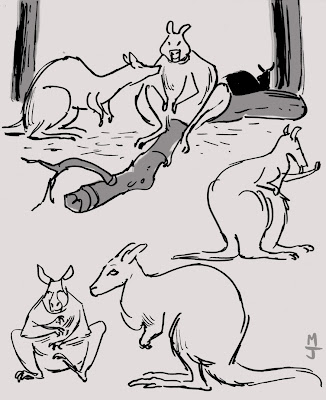 The goats were fun to draw & we could get into the pen & sketch them up close. True to their reputation they try to eat anything you leave lying around including my fold-up chair, plastic bag, coat & sketchbook! 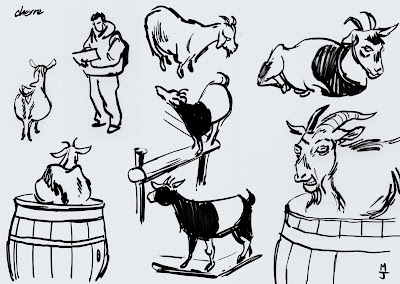 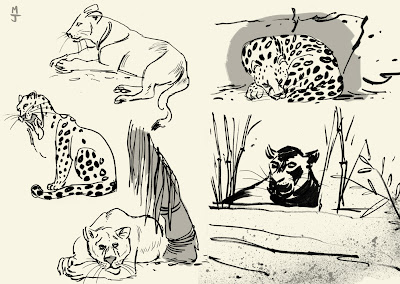 The big-cats looked pretty miserable in their relatively tiny enclosure. The cheetah tucked his paws & tail beneath his body & stayed in a corner to keep warm. 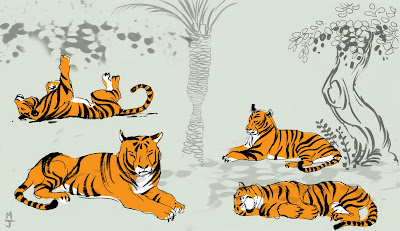 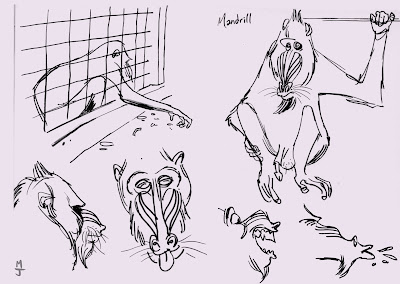 The Mandrills were challenging to draw, they move around a lot but have great expressions & they all seemed to have colds! The male I drew above had no shame! 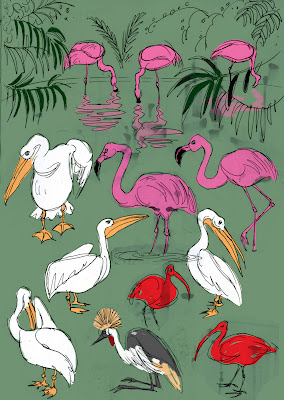 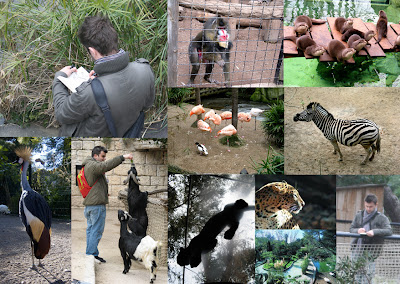 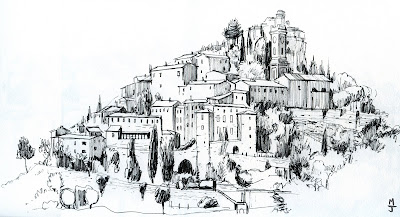 The next official SketchCrawl is next month but we couldn't wait that long! Carlos, Seb, Melanie & I headed up to Eze-a medieval village perched on the cliffs high above Monaco. It's a stunning location & we had perfect weather conditions for sketching. 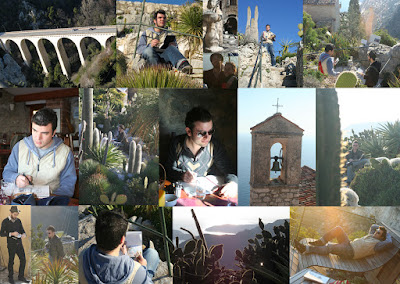 Similarly to St.Paul de Vence, Eze has labyrinthine narrow streets with lots of grotto-like shops to discover. I love to draw the ancient architecture which seems organically fused with the rock foundations. 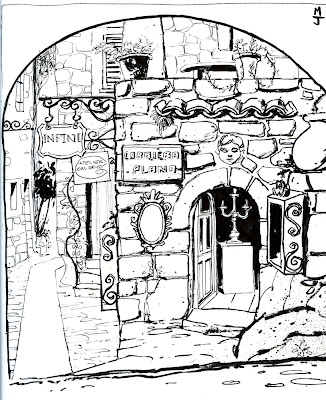 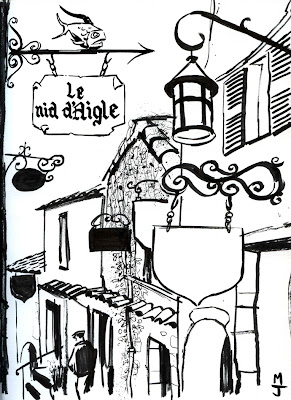 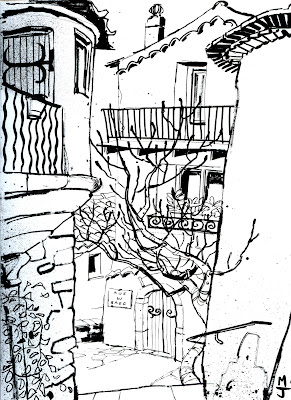 Planes fly in low over Cap Ferrat in their approach to Nice Cote d'Azur airport. 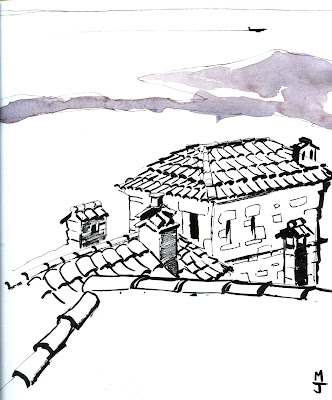 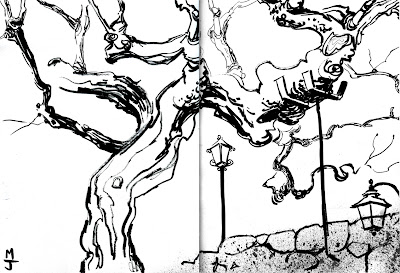 This ancient, gnarled tree makes a perfect natural canopy when the sun gets too hot. It dominates the terrace of my favourite café in Eze- 'Le Nid d'Aigle' the Eagle's Nest. 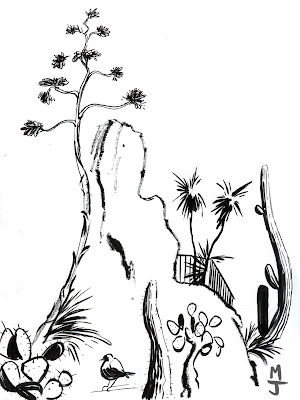 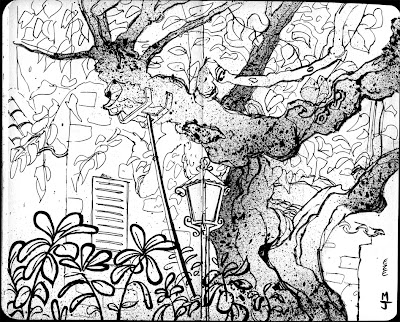 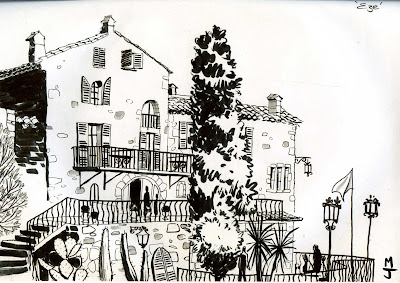 We finished the day sketching amongst the cacti in the jardin exotique that crowns the summit of the town. There are great views of Cap ferrat to the West & the Italian Riviera to the East. 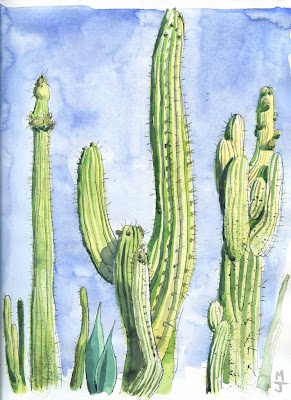 The others should be posting their sketches on their respective websites soon. Our next trip is to the zoo!
Posted by Matt Jones at 10:20 am 14 comments: