Saw 'Ratatouille' last night in French! The voices are great & help make this 'postcard' version of Paris more authentic-even the on-screen graphics are in French;the hand-written letters, Gusteau's book etc. I assume these scenes were re-rendered for the 'version Francais'? 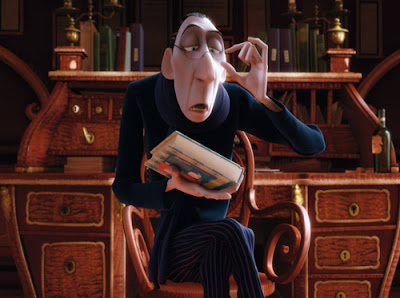 I still want to see the 'version original' to hear Peter O Toole as the critic.

The camera-work & the animation in the film were the stand-outs for me. As Andrew Stanton said in his Comic-Con speech-Pixar has animators who've been there for 15 years & just get better with each film. I thought this kind of long term nurturing of talent died with the Nine Old Men-they had 40 years to perfect their craft-but it seems Pixar have a similar commitment, let's hope they can keep improving for another 25 years! 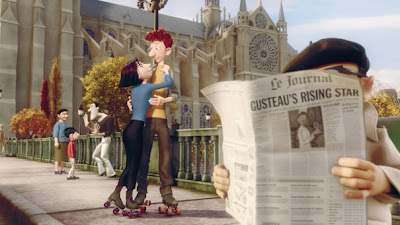 I know Linguini's design was based on Lou Romano's appearance somewhat but don't you think Sempé's 'noses' could have been an inspiration too? Linguini could be the adult version of petit Nicolas. 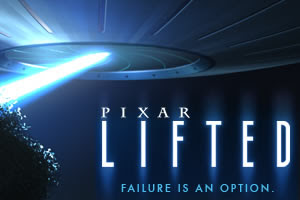 Here 'Lifted' is called simply 'Extra Terrestre' & played well with the audience I was part of. It got big laughs from the younger kids & older adults. When the WALL-E trailer played & the little robot says his name it got a big response from the crowd with the kids copying the voice! Bodes well for next summer. . .
Posted by Matt Jones at 5:08 pm 12 comments:

My trip to Cannes & wot i did lurn 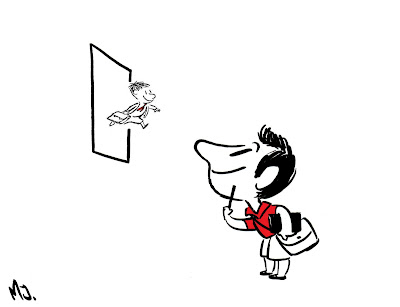 This weekend I have been on a nice day by the seasisde in Cannes. I saw an art extibishun about a French skoolboy called Nicolas. This is wot i lurnt-

Monsiur Sempé's first name is Jean-Jacques and he draws VERY small. He called the boy Nicolas after he saw a wine shop with this name. 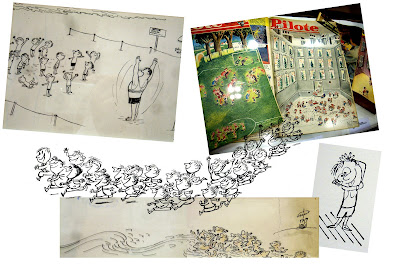 Monsiur Goscinny's first name is René and he wrote about the most famous peeple in France. He wrote about Nicolas as I have said already and a French viking called Asterix and even a French cowboy called Lucky Luke. He knew them all but is dead now. 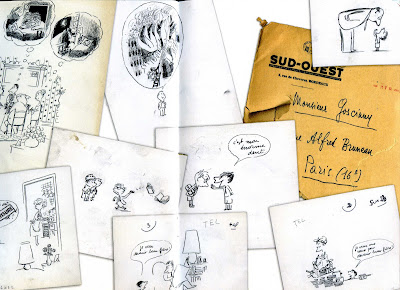 It was a very nice museeum and very intresting. I was taking lots of piktures too.
Posted by Matt Jones at 10:24 am 5 comments: 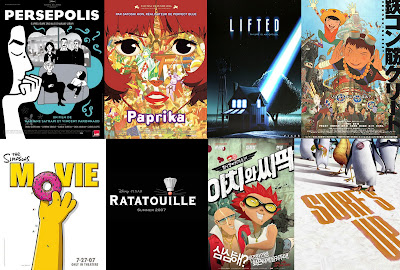 This must be one of the most interesting years for animated feature releases in the history of the medium. We saw the Simpsons Movie last night- it's thankfully brief, after an hour of non-stop gags it becomes slightly wearisome-like a long episode of the TV show. However it's very funny & the feature format allows the film-makers to break many TV restrictions; nudity, mild swearing & even sex!
Posted by Matt Jones at 11:56 am 7 comments: 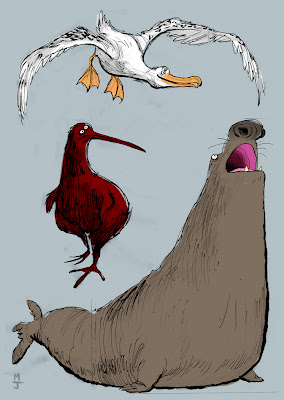 The Natural History Museum in Nice must be the smallest in the world-it's ONE room! These goofy looking creatures I've drawn are pretty much the only exhibits they have apart from lots of pickled fish in jars & some groovy shark jaws. 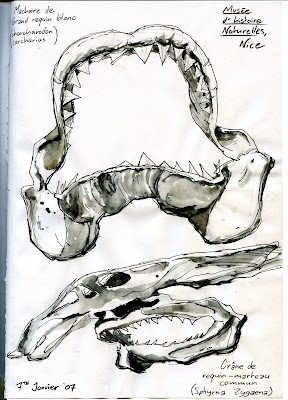