I wish you a Merry Christmas one & all! Here are some early presents for you, first some colour sketches for ideas I've been noodling with lately. 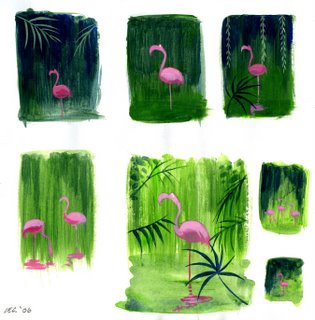 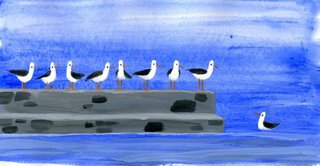 Also updated my GARY blog. Added the third part of the FAMOUS ARTISTS COURSE to the MORGUE & updated the MOLESWORTH, LONDON, USA & St.TRINIAN's sections of the RONALD SEARLE blog.
Added a new painting to my HEIDI blog.
I started a FLICKR set of my Paris sketchbook too. Link on the right.
I hope everyone has a great festive season & New Year celebrations. Catch up with you in 2007.
Posted by Matt Jones at 12:07 pm 15 comments: 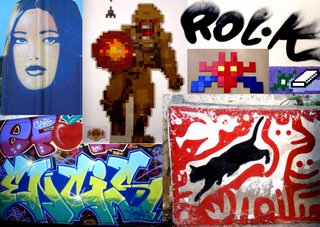 Yesterday the Cote D'Azur media press descended on our small team as the Minister for Industry paid us a visit. We all shook hands with the man & had our photos taken while Bibo was interviewed & Monsieur Ministre gave a speech. The Region wanted to thank Bibo Films for bringing the production to Nice & encourage other film-makers to come too.

Bibo & Bruno appeared on the regional news last night & the photos made it into the papers this morning. Here's a pic of Bibo getting in the way of my storyboards! 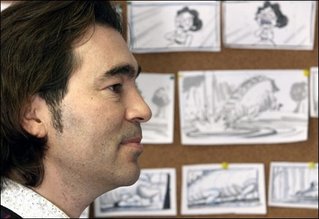 “The Côte d’Azur is to France what Hollywood is to the United States, star system and show business, but also technology and know-how,” states Bibo Bergeron, director and producer, Bibo Studio. After seven successful years with Hollywood giant Dreamworks, Bibo Bergeron is coming home to France and has chosen the Côte d’Azur to establish his own studio. With 1,000 square meters of space on rue de la Liberté in the heart of Nice, Bibo Studio will invest € 1 million in its network of 3D animation stations, and plans to create 120 jobs over the next three years. Bergeron cites as key factors in choosing the location: the proximity of Sophia Antipolis, the film industry’s regular visits to the Côte dAzur for festivals and markets, and the technical training available at the University of Nice Sophia Antipolis, with which he will partner to develop a Masters in Film Animation. “We want our Nice studio to become a benchmark in the production of film animation,” Bergeron continues. Bibo’s target market includes producers of Europe’s high-budget animation films (€ 15 to 25 million). Its first production will be “Un Monstre à Paris,” directed by Bibo Bergeon and developed with EUROPACORP. With his storyboard team in place in Nice since November, Mr. Bergeon will continue production in Paris until Bibo’s Nice facilities are fully operational, in May 2007. The arrival of Bibo Studio in Nice is a major event for the Côte d’Azur, which today reinforces its cinema activity, known around the world in the days of Studios Victorine.
Posted by Matt Jones at 5:50 pm 10 comments: