The old man mad about drawing 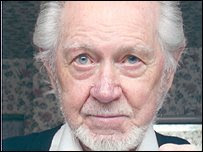 This past weekend I had the great privilege of spending an afternoon with one of my artistic heroes Ronald Searle.
It took 2 years, several letters (Mr Searle possesses no phone) & all my fingers crossed to arrange this meeting. I approached the somewhat reclusive artist with great respect for his privacy & he agreed to welcome me into his home for an hour last Saturday.
He's 88 years old but was in fine form talking for almost 2 hours in the end before he concluded our chat. I could have listened to him all day but he had to rest. 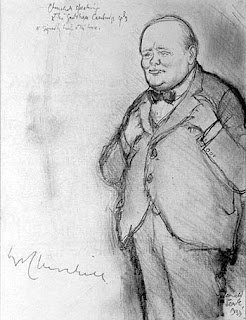 However within those 2 hours we discussed much; drawing of course, he looked at my work & gave me his opinion (looks like no human hand has touched it, was it created by pressing a button?!). We leafed through several books of his art that I had taken along & told me the stories behind many with impressive recall. Meeting Churchill, going to Poland with Topolski to see Picasso, seeing the construction of the Berlin wall, posted to Cyprus as part of a top secret mission to wage psychological war during the Suez crisis, jetting around the world for HOLIDAY magazine & LIFE magazine as an illustration journalist. We touched on the subject of his time as a prisoner of war but skirted around the painful memories (although he couldn't help but chuckle at the irony of his book of POW sketches being printed in Singapore!) I asked him about visiting Walt Disney who he didn't care for, preferring the company of the artists specifically Ken Anderson & others whose names he'd forgotten. (He's well aware that Anderson aped his style in the production of 101 Dalmations). He also revealed that he enjoyed working for a while in New York with Bill Tytla at his commercial house there.

We discussed the technicalities of drawing & after a demonstration of pens that he uses he gave me a dip pen! Unremarkable in itself but I'll treasure it! 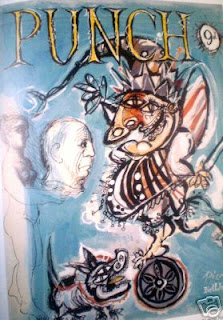 Concerned by current affairs he discussed politics & the financial situation in the U.S. He lamented the state of modern political caricature in the States, believing it's been crippled by syndication. Asked who he rates these days he said Steve Bell & Martin Rowson (who made the 2006 documentary on Searle). But it still puzzles him why no-one came along as good as André François, Sempé or Topor, nobody followed in their footsteps. He has fond memories of friendships with all those contemporaries whose great talent he said made him realize his shortcomings. His eyes twinkled when recalling the fire in his belly after seeing a Picasso exhibition that really made him want to draw. He felt 'Picasso may never have finished anything but he opened all the doors for us to go forward.'

I enquired about his work ethic & he told me he still works from 9am to 6pm everyday with a short break for cheese along the way. He said he's 'still excited to get to his drawing desk each morning & see what will come out of his pen.'


I feel extremely fortunate to have met with a true master & hope to catch up with him again soon to ask him yet more questions about his career & art. He was mystified at reaching his age & quite tickled to think that in only 12 years he'll be 100!! I'm sure he'll still be drawing too. I'll be putting further details of our chat over on my Ronald Searle Tribute Blog once I've transcribed everything he said. 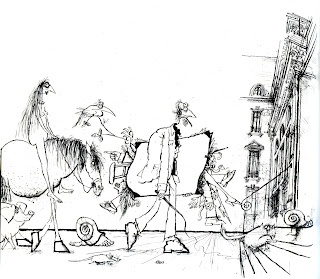 "From the time I was six, I was in the habit of sketching things I saw around me, and around the age of fifty, I began to work in earnest, producing numerous designs. It was not until after my seventieth year, however, that I produced anything of significance. At the age of seventy-three, I began to grasp the underlying structure of birds and animals, insects and fish, and the way trees and plants grow. Thus, if I keep up my efforts, I will have an even better understanding when I am eighty, and by ninety will have penetrated to the heart of things. At one hundred, I may reach a level of divine understanding, and if I live a decade beyond that, everything I paint-every dot and line-will be alive. I ask the god of longevity to grant me a life long enough to prove this true."

-Hokusai, postscript to One Hundred Views of Mount Fuji 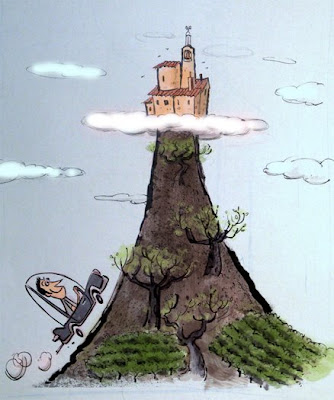 Here I am en route to the village in the clouds where Mr Searle lives!
Posted by Matt Jones at 1:22 pm 49 comments:

Back in late 2006, before I came to Nice to work on 'A Monster In Paris', I storyboarded an episode of ROBOTBOY for Alphanim in Paris. I blogged about it here & now said episode has turned up on Youtube. I worked from an outline as opposed to a finished script & Bob, Heath & I basically made it up as we went along. The resulting episode is one of the more surreal-it's the 'Alice In Wonderland' of season 3. If you can stand the fat kid's voice check it out below: 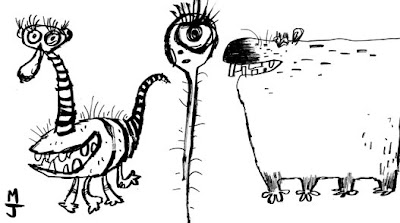 Rachel and Margaret at Dreamworks have invited artists to contribute to their Picture Book Project with the theme 'funny monsters'. I had a great time coming up with a creature that kids would like to colour in-here are some of the roughs: 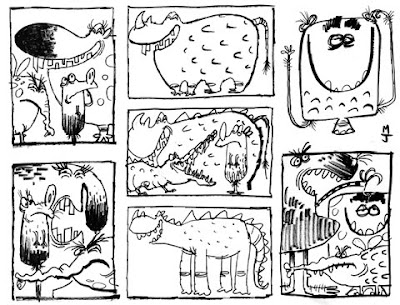 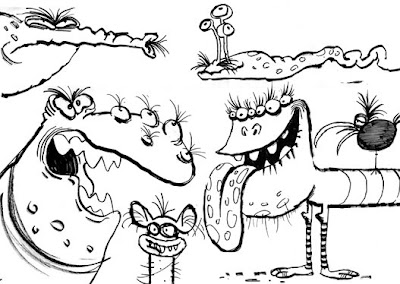 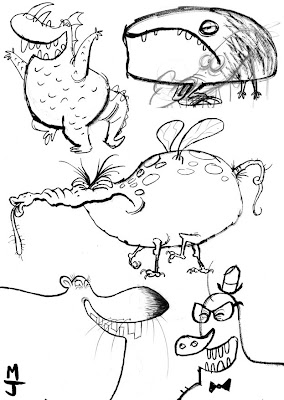 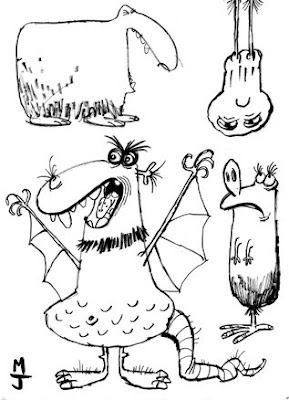 My final design & the colour version can be seen at the project's blog along with all the other artists' monsters. The project will help orphaned children in Ghana & Tijuana.
Posted by Matt Jones at 3:25 pm 15 comments: