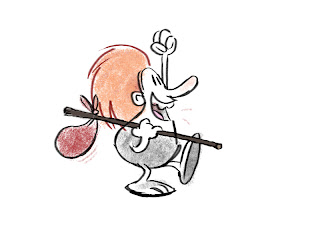 My entry to the NorwayYourway contest won!  I'll be the UK representative travelling with 'creatives' from France, Italy, Germany and Russsia through mid-August.  It is going to be a great opportunity to explore an amazing land and report back with lots of sketches.  Many thanks to everyone who voted for me.
Posted by Matt Jones at 12:45 pm 23 comments:

Back to my trip around Spain.  The first stop in France was the Loire valley.  After driving down from Calais we spent a freezing first night in a campsite outside Tours.  It was late May & the camping season hadn't yet begun so we climbed the fence & pitched our tents out of view of the road. 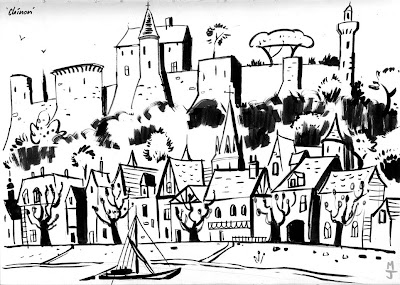 Next day we visited one of the fairy-tale chateaus of the Loire;  Azay-le-rideau before setting up camp at a great site next to the river in Chinon opposite the impressive old fortress. 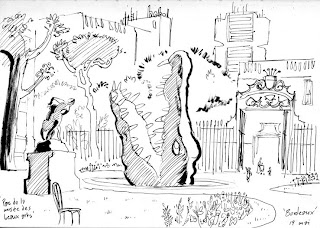 After lunch the next day in Angouleme we moved onto Bordeaux.  We explored the city on foot a little then drove around looking for a camp-site.  We didn't have GPS or internet access so looking for camp-sites became pot-luck.  Sometimes it took hours but often we found them by following our noses.  The further south we moved the warmer the nights became but of course that means mosquitoes too. The camp at Bordeaux lac had a huge pond full of croaking frogs, mozzies the size of pigeons, hooting owls & a mooing cow!  That was a restless night. 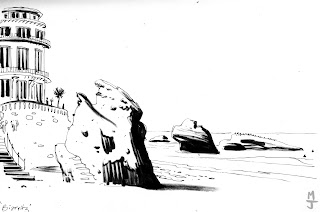 Onto Biarritz on the Atlantic 'riviera'-choc-full of casinos, sports cars & fab beaches, it's like Nice, St Tropez & Monte Carlo in one.  The campsite didn't measure up however- it was right next to the airport!  The pitch was hard & uncomfortable and we were harassed in the night by rampaging hedge-hogs!  Another tough night.

Next day we crossed the border into Northern Spain-first stop San Sebastian. 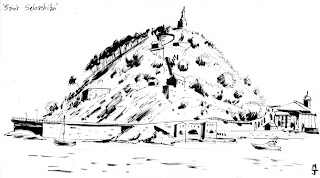 The North coast of Spain is really quite beautiful-as we drove onto Bilbao we passed through some stunning landscape.  On the coastal road at Islares we found a great resort campsite with an incredible  beach. 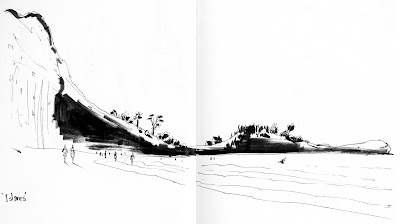 Our next destination was Bilbao . . .

The Guggenheim was our first major museum-the building is remarkable. 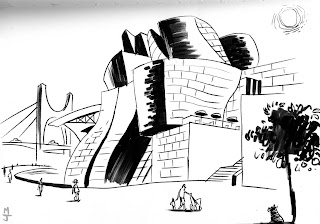 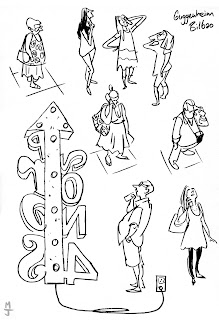 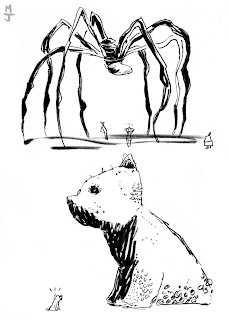 Lots of character in the faces of the Spanish people. 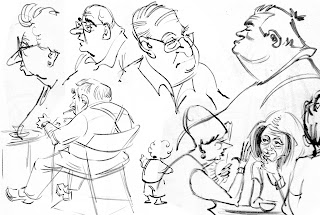 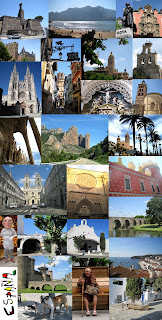 Send me to Norway! 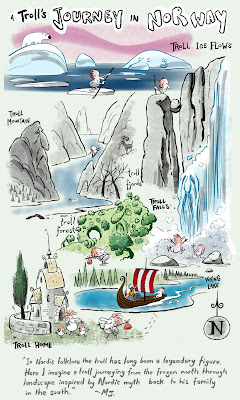 Hey all-here's my entry for the NorwayYourWay competition, a campaign to promote tourism in Norway.  Entrants are asked to submit a piece of work inspired by Norway. The 5 winners will tour around Norway sketching, writing & photographing & blog their results along the way.  Please vote for me or enter yourself by visiting the site here
Posted by Matt Jones at 10:59 am 28 comments: