Along the drive through France & Spain I kept a 'journal' in the form of a map to keep track of all the places we visited along the way.  We were moving every day so after 3 weeks it was tricky to recall everywhere we'd been but my map helped.

The inspiration for my trip to Spain was to see Picasso's Guernica in the flesh before I leave Europe later this year.  The painting is in the museo Reina Sofia in Madrid, I was so excited to see it I virtually ran through the gallery to find it!  It's scale is intimidating & the sheer power it emits is breath-taking.  Hanging opposite it is a fascinating series of photos Dora Maar took of it's evolution.  Picasso had made hundreds of studies in preparation of tackling this all important theme but the imagery changed radically even as Picasso worked on the final painting.  It looked completely different at the rough stage. 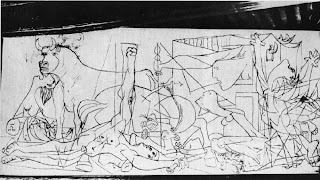 The Picasso museum in Barcelona primarily focuses on the artist's early years; training as an artist in Barcelona & establishing himself as an artist in Paris.  His later work is represented-there's a series of Cannes pigeons and also his well known version of Velasquez' 'Las Meninas'.  The current exhibition examines the relationship between Picasso & Rusinol. 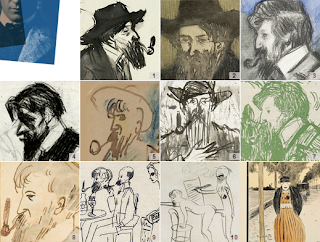 Picasso: The Mediterranean Years 1945-1962 just opened at the Gagosian gallery in London. The show is outstanding covering my favourite period of Picasso's ouvre.  During my time on the French Riviera I often went on the Picasso trail-visiting the places where he lived & worked & the musee Picasso in Antibes; his chateau at Vauvenargues.  I've been working my way through John Richardson's epic 3 part biography of the artist -illuminating stuff.  It's Richardson who has helped curate this latest  show with Picasso's grandson Bernard Ruiz-Picasso, a follow up to their well received 'Mousqueteros' show in NYC last year.  Richardson has contributed an essay to the exhibition catalogue- an essential but hefty publication  (with a price tag to match). 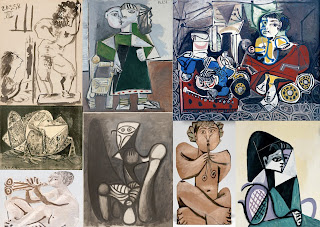 The work produced during this period in Picasso's life is full of post war joie de vivre-it's his most playful & intimate work, based on Mediterranean tradition & mythology and his extended family.  Amid Amidi recently pointed out on Cartoon Brew that Picasso could be considered a cartoonist & it's this period that reflects that notion best I think.  A lot of what we do in animation these days is influenced by mid 20th century graphic animation artists (Kimball, Blair, UPA, Searle et al.)  all of whom were in turn looking at the work of the Spanish master. 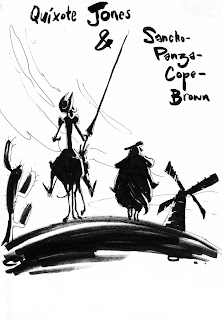 Before leaving Europe for the US later this year I wanted to see Spain and in particular Picasso's 'Guernica'.  My old chum Will volunteered to be my travelling companion, my Sancho Panza.   We packed the car with all our camping kit & headed south for a 3 week expedition through France & Spain.  Will  navigated us across the continent with only a large scale roadmap & the stars, which may explain why we were so often lost looking for campsites.  But the "scenic routes" were better anyway and Don Quixote never had an i-phone with GoogleMaps either. 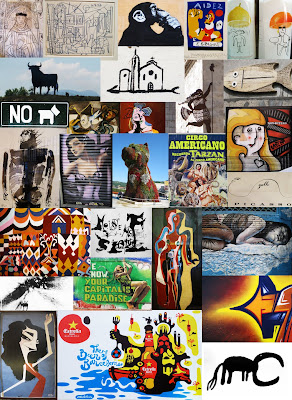 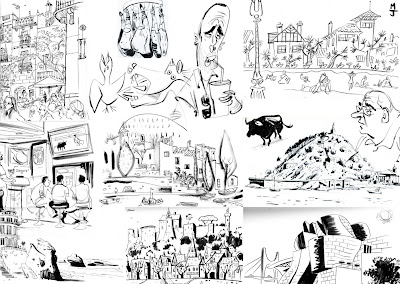