On a wet weekend in San Francisco recently I visited the Walt Disney Family Museum which opened in the Presidio last year.  It's a very impressive, state of the art installation with oodles of interesting artifacts to offer animation fans.

Walt's childhood and family history is chronicled in fascinating detail. The Disney clan started in France then settled in Ireland before America.   Letters, photos & artifacts such as Walt's Dad's fiddle really bring alive the period young Walt grew up in.  His tough upbringing on a Kansas farm seemed to forge the man he would become-he reminisced about rising at 3am to do a paper round giving a sense of a work ethic instilled by his stern but loving father. 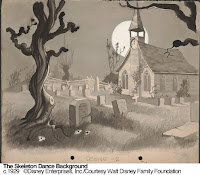 There are fascinating photos of Walt's early animation days with Hugh Harman & Rudi Ising and an account of the fateful meeting with Ub Iwerks & their subsequent partnership. Supporting the history are dozens of tastefully chosen pieces of art from the Disney films; from original art from the Skeleton Dance and Steam Boat Willie,  through animation drawings of all the films of the 'Golden Age'.  Even the very first design of Mickey is there. 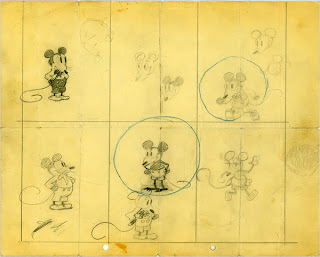 There is an exquisite little maquette of Ferdinand the bull that I'd never seen previously.  Marc Davis' Bambi designs, Milt Kahl's Pinocchio rough sketches, Fred Moore centaurettes from Fantasia, mind-boggling Bill tytla drawings of Chernabog, Eyvind Earl background paintings from Sleeping Beauty, the multi-plane camera, tiny Kay Nielsen paintings . . . Probably the most interesting article for animation fans was a scrapbook put together by Disney Effects expert Herman Schultheis.  It's displayed open in a case but a nearby videoscreen flips through its pages.  It's a collection of behind the scenes photographs, notes & drawings detailing the production of Fantasia 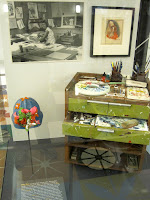 Mary Blair  is well represented with many original paintings including gorgeous colour designs for  It's A Small World.
One of Mary's studio cabinets is on display along with a hard hat made for her by workers on the construction of It's A Small World. 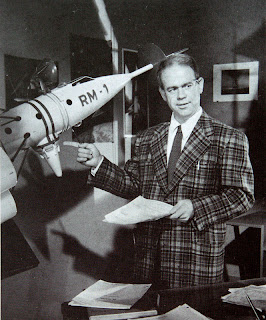 Disney's move into TV during the 50s throws up an amusing anecdote: during production of 'Man And The Moon' Ward Kimball consulted Werner von Braun who phoned him on the day of the first US space mission to tell him "You see, they're following our script!"


The exhibition culminates with a huge model of Disneyland 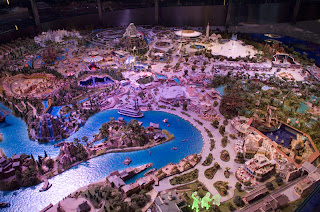 The Walt Disney Family Museum is heaven for Disney/animation fans.  The entrance fee is rather expensive ($20) but it's worth it -you could literally spend all day in there. . . and it's situated in a beautiful part of San Francisco in the shadow of the Golden Gate Bridge.

You can view a photo-tour of the museum  here
Posted by Matt Jones at 10:36 pm

Thanks for the review, I really want to check it out next time I'm home!

Such elaborate entry and only one comment?...I think that the competition with Cartoon Brew is tough!

Great to meet you at the CTN dude, I'll be in San Fran in April so it would be ace to catchup around then if your free. Cheers pal! O

Absolutely-Pixar will be finished with the new construction work by then so I can give you the tour. Remind me nearer the time.

That would be amazing! Thanks duder, I definitely will :D

I 've been there TWICE and I LOVE this place!!

It's a world class museum- did you see the Snow White exhibition?

It's a world class museum. Have you seen the Snow White exhibition yet?