My old college chum Matt Cruickshank found his graduation film on Vimeo and mine is up there too. The 5000 Brains of Docter X was initially a 1st year group project between James Finlay, Mike Rooker, Dan Harrod & myself. In the 2nd year I developed it further with Darran Woods-we fleshed out the premise but it was too ambitious & we cut the whole thing down, animating just our favourite scenes. Max Tyrie came in near the end to help us out with the CG & compositing.  We animated our favourite scenes & strung them together in a spoof trailer format, the music is of course by Danny Elfman from the Mars Attacks! soundtrack (copyright Warner Bros. Music).

I dug out some of the production artwork I made for the film.  We were influenced back then by Ren & Stimpy of course, Mars Attacks! and B-movies from the 50s, Luc Besson's The Fifth Element, Chuck Jones' cartoons and Leni Riefenstahl! 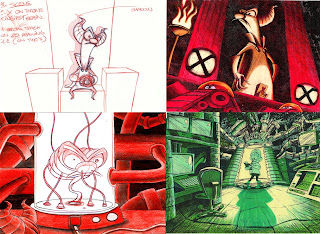 Darran built & animated all the CG elements & I did the 2-D animation.  I remember pulling many all nighters putting this together but we had a blast making it.
Posted by Matt Jones at 4:38 pm 11 comments: 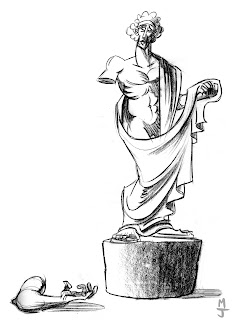 Last week Dutch interior designer/DJ Gur-B was in town.  Normally he likes to check out designer vinyl toys and graphic design bookshops so I thought I'd show him some real drawings for a change. 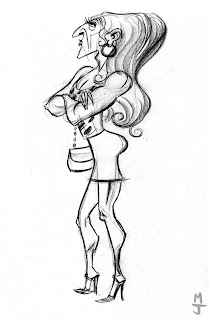 We headed over to the British Museum to check out the Renaissance Drawings exhibition.  There were prime morsels on show by all the Ninja Turtles; Leonardo, Raphael, Michelangelo & Donatello but I was more intrigued by a statuesque transvestite who was eyeing up the chiselled torsos on show.  S/he looked like this:


After we'd looked at 100 pictures of pretty ladies with their heads cocked to one side we headed to the Prints & Drawings room where we donned white gloves & dug out some dusty old boxes of original Ronald Searle drawings which were much funnier. 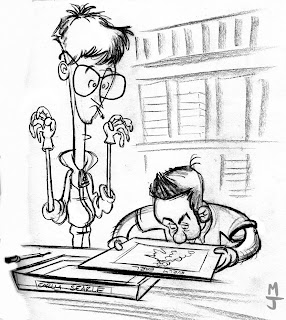