New Year with the Searles

Uli & I had another chance last week to visit Ronald Searle & his wife Monica. As last time we had a splendid lunch in their favourite restaurant then the rest of the afternoon back at their place. Monica kept brewing her strong coffee to counter-act the champagne which Ronald kept pouring! 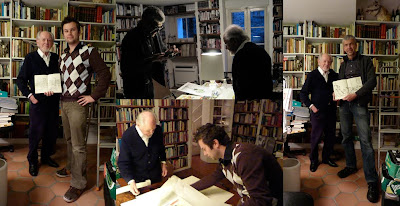 This time we were privileged to be permitted access to the inner sanctum of chéz Searle. Few are allowed to see his studio & study but his work & sketchbooks were due to be shipped off to the Wilhelm Busch museum in Hanover where his archive is held. Ronald gave us a real treat & let us look at anything we fancied-he really is the most generous 'world's greatest living cartoonist' that I know! 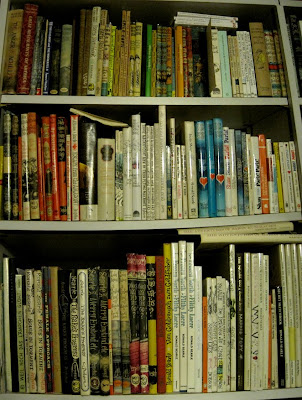 Of course Ronald's collection of his own books is incomparable-he has all editions (plus proof/copy versions)in mint condition. There were several that I'd never even heard of.

Seeing the 'top-shelf' was nirvana for these dedicated Searle fans-a lifetime of sketchbooks! Last time we browsed his Scrooge and Monte-Carlo books but here were the rest-Morocco, Palm Springs, Hawaii, Dublin, Germany-all the original notes & drawings Searle made for the HOLIDAY magazine reportage. 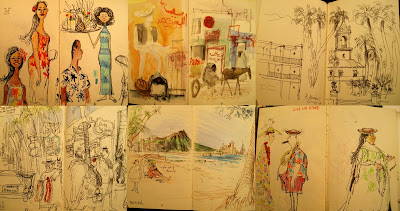 It was all we could do to flip through as many as possible, Searle graciously letting us photograph anything we wanted. Naturally we couldn't get everything-between carrying on the conversation with Ronald and Monica, climbing up & down the step-ladder & the effects of the champagne-it was tough to focus! I'll be putting the rest of the photos up on the Searle blog soon. 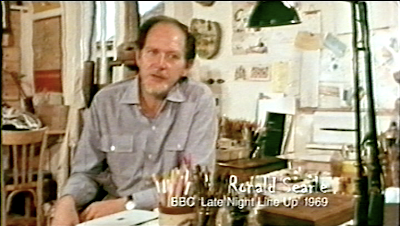 Researching Searle I'd struggled to find 'A Step In The Jungle' a documentary made by the BBC in the 70s. Luckily Ronald possesses a copy on VHS and we were able to watch it with him adding commentary-

Monica too has her own collection of her husband's work & was very pleased to share with us her 'Mrs Mole' drawings. A special series of over 40 pictures that Ronald made for her every time she was ill. She would always awake to find another depiction of a day in the life of Mrs Mole- Monica herself in fact-easing the misery of her illness.

It was an honour & very touching to see these personal drawings. They're very charming, lovingly crafted and infused with the Searles devotion to each other. 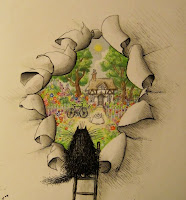 Once again regretfully it was time to leave the Searles in their cosy little house in deepest Provence. Monica told us the bicycle in Searle's work is symbolic of happiness. With Ronald approaching his 90th birthday in March they're still going strong & the finest people to spend a Saturday afternoon with.
Posted by Matt Jones at 2:48 pm 12 comments:

American Odyssey pt.2 On The Road 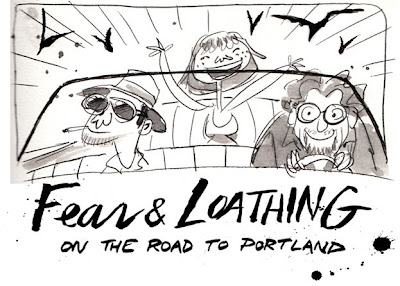 ". . . we were on the edge of the desert, somewhere around Barstow . . ." when we began to wonder exactly whose idea it was to drive to Portland via Vegas! The plan was to head out east for a couple nights in the casinos then north to Portland via Salt Lake City & Twin Falls, Idaho. We'd return to LA through the Redwoods, Napa Valley, San Francisco & Santa Barbara- a 2000 mile round trip, in a week! 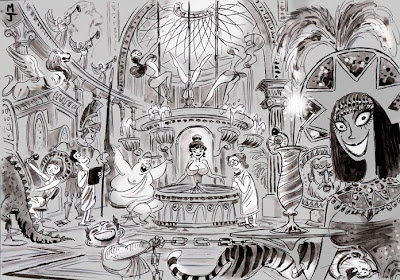 Las Vegas is more surreal than I could ever have imagined-nowhere does fabricated over the top decadence like Vegas.
We stayed at a quiet little place off the strip- the sophisticated & understated Hard Rock Hotel! 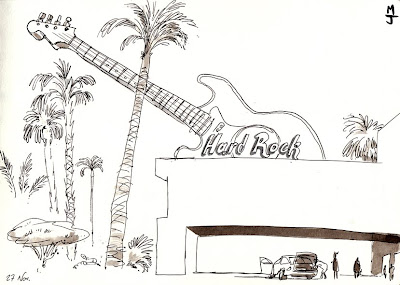 The casino CCTV must have observed me standing in a corner to make this drawing -I was soon surrounded by 3 burly security men checking what I was noting down in my black book. When they saw I was merely sketching the most senior said "pretty good . . ." and they left me alone. 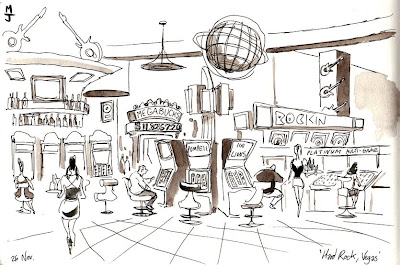 Vegas to Portland is a long drive-especially if you make a 4 hour detour into the desert to see the Grand Canyon-only to find it 'closed'! The changing landscape we saw across 800 miles was impressive. We stopped in Salt Lake City, Utah-it was freezing there but those Mormons sure keep a nice, clean town. We saw a lot of exotic road-kill along the route and travelling hundreds of miles meant it was only a matter of time before we killed something. Thankfully it wasn't a raccoon or a deer or a bison but a hapless pigeon who met his maker when our radiator grill struck him at 90mph! 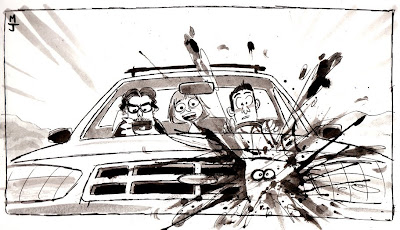 Rolling into Portland we instantly fell for this charming city. Despite the rain & mist the town has a relaxed vibe to it that you instantly warm to. The lovely folks at LAIKA had set up a tour of the studio for us-we were gob-smacked by the detail of the sets & puppets for Coraline. Many thanks to Patrick, Chris, Jan, Tony and everyone for making us feel so welcome. 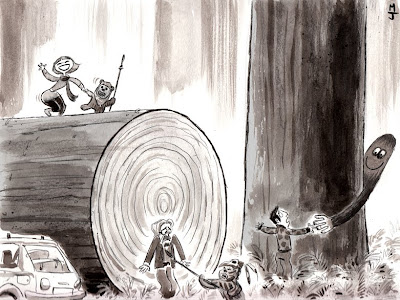 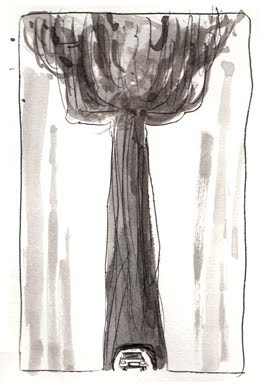 On the way down to San Francisco we took a breath-taking route through the great Redwood Forest and the Avenue of Giants. We also found the 'Chandelier' or 'Drive-thru Tree'-it's 2400 years old!


After that it was on to San Francisco down through the vineyards of the Napa Valley. . . 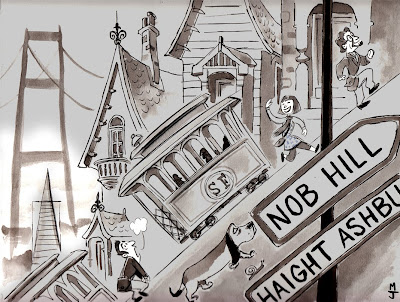 The steep hills of SanFrancisco give the city a unique character but they're hard work!

Of course while in San Francisco we had to visit PIXAR! I did my Ronald Searle presentation for an appreciative audience & then we were shown around by our welcoming hosts Daniela Strijleva and Ralph Eggleston. 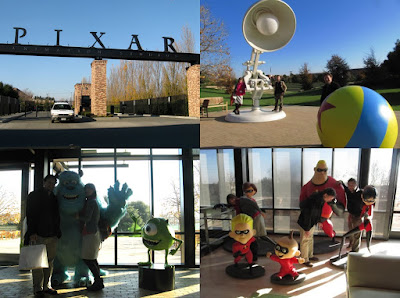 That was the last stop on the tour-we were pretty exhausted after so much travelling & visiting friends & studios. On the last night we relaxed in Haight Ashbury before hitting the road next day back to LA. 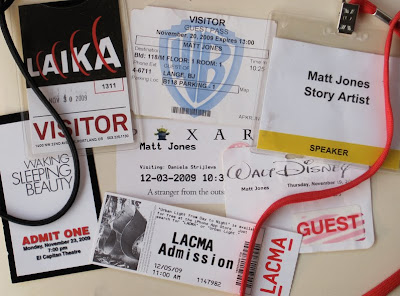 Back in LA on the last weekend I hung with my old buddy from Uli's studio Leo. We went down to LACMA- I was keen to see their Picasso collection. 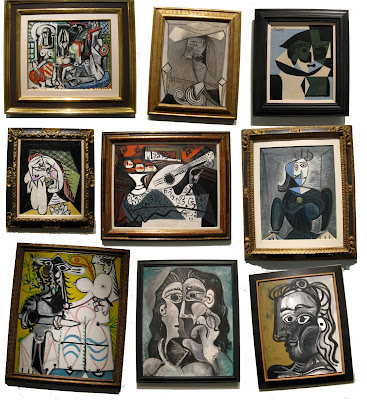 We spent a recreational last day in LA hiking up Griffith Park with Amid Amidi. We toured the observatory before Leo led us up a treacherous route to the summit of mount Hollywood. We braved the threat of rattle-snakes, mountain lions & Amid's moustache to see the incredible view from the top. 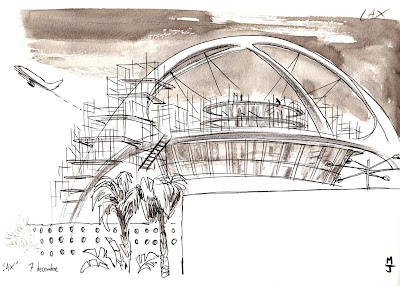 The 'Theme Building' restaurant at LAX is currently shrouded in scaffolding while undergoing renovation work. I flew back to the UK on the 7th December after 3 weeks of countless sights & experiences. I saw as much as possible & met more people in that time than in a normal year back home. America was good to us - I'll be back . . . 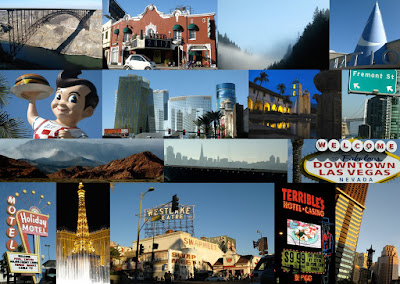