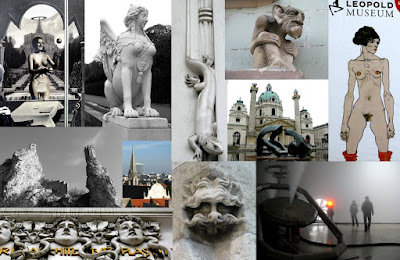 Last weekend I visited a part of Europe that I'd never thought I'd see- Slovakia! It was all down to my Canadian colleague, Mr. Kris Pearn, and his insatiable desire to drink beer in every European capital before he moves back to the U.S. Of course I needed little convincing to tag along on the expedition into the lower Carpathian region! 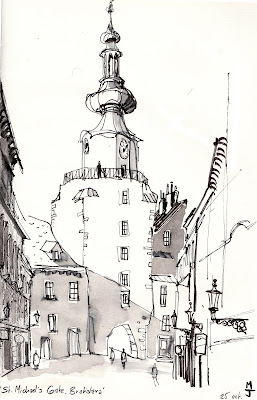 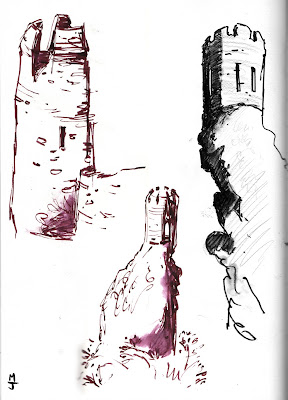 We visited the impressive Devin Castle, outside Bratislava. Twice unsuccessfully beseiged by the Turks but blown apart by Napoleon's soldiers-it's still an imposing fortress. We dropped water down the central well & listened until 5 seconds later it plopped into the Danube hundreds of feet below. 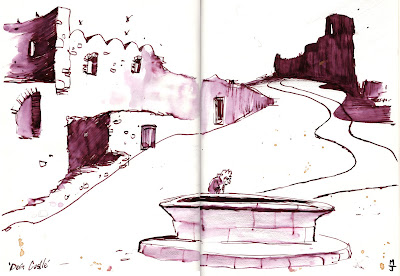 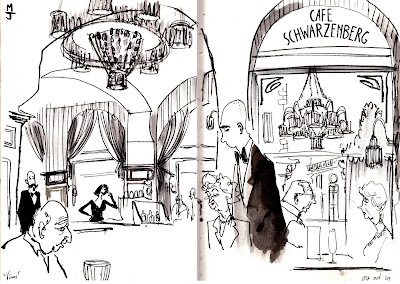 Bratislava is right on the border with Austria so we hopped on a train for a day out in Vienna. Majestic city-we tried to see as many of the great galleries as possible and had our fill of Klimt and Schiele at the Belvedere and Leopold museums.

The highlight for me was visiting the Secession building to finally view Klimt's Beethoven Frieze which I'd admired since art school days. 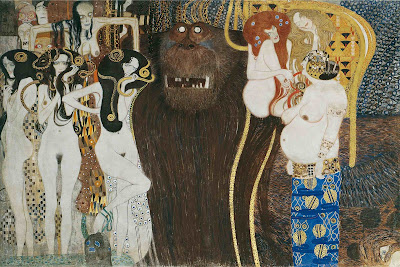 Love that monkey!
Posted by Matt Jones at 5:45 pm

Great studies: the first and last especially - excellent linework and use of wash

great trip and sketches! were you using brushes for them?

Thanks guys! No brushes, no-just fibre tip pens & a calligraphy pen for the castle sketches.

Thank your for giving us benefit of your trips Mr Matt...
It's a good kick in the ass for a homebody like me.

I love your St Michael's Gate.
(I still admire your mastered virtuosity.)

Great work, I really like the expressive quality of your lines. I also really enjoyed the way you captured the expressions of the people in the cafe, especially the old guy in the bottom left corner. Really excellent stuff, I look forward to seeing more.

Beautiful sah! It makes me feel like I was there!
Bratislava!

Thanks for the kind words all!

ha ha.. that monkey... it seems to have wandered in. 'Come on ladies, strike a pose... yes yes try not to mind the monkey... well I'm afraid you'll just have to ignore the smell..'

Mick, have you seen Erich Sokol's version of this painting?