An afternoon with the Searles

Last weekend Uli & I flew down to the French Riviera for a very special rendez-vous. We had been invited to lunch by Ronald Searle and his wife Monica. Excited and nervous we made the drive up into the mountains to the remote village where the Searles have lived for 40 years. We were to meet them at their favourite restaurant at noon on Saturday.

I had met Mr Searle previously but not his wife & Uli was only known to them through my written introduction. However the Searles soon made us feel like old friends as the anecdotes flowed as easily as the champagne. Ronald and Monica entertained us with tales of travel adventures, ghost-stories and famous friends. Amongst a wide range of subjects we talked about Fabergé eggs, a Welsh version of King Lear,Tony Curtis, cemetaries, Albrecht Durer and Diaghelev, the eskimo technique to cure seal skin with urine, sketching in the theatre with a telescope, Viennese ballet and both World Wars! 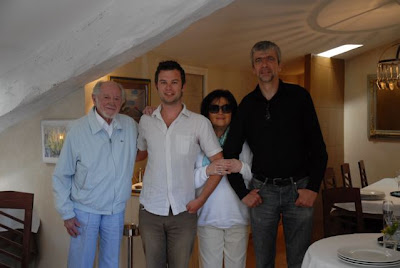 I realised meeting Ronald Searle previously on his own is to know only half of a couple that are inextribably linked & depend on the other for support, physically & emotionally. Monica is extremely charming company-a vivacious, strong woman who adores her husband and his art (and an accomplished artist & jewellry maker in her own right). It was clear that they're still very much in love after 50 years. They're a couple who value their privacy highly & welcoming us into their home was a rare privelege. Both Uli & I felt honoured to spend time with them. Ronald told me they had set aside the entire afternoon to answer our questions. Later at the house we were delighted to be able to peruse a couple of sketchbooks that Ronald had brought down for us. A rare treat for any Searle fan.

What's more Ronald presented me with a lovely gift - a cel set-up from Mr.Magoo -originally given to him in 1957 from the UPA crew. Monica also gave Uli & I a copy each of the catalogue from their joint exhibition held at the Wilhelm-Busch-Museum in Hanover. 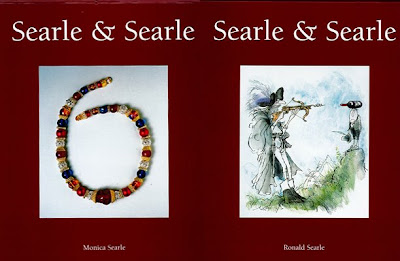 The day was sheer joy for two Searle fans but it was Ronald & Monica's generosity & kindness that made the meeting so memorable & enjoyable. 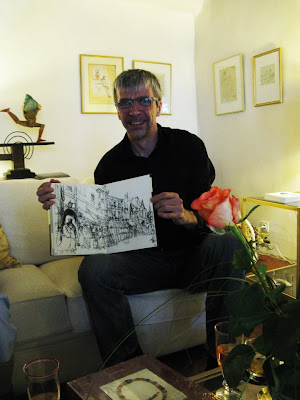 Uli & I are both writing down as much as we can remember & plan to make further posts on our respective blogs. Ronald kindly allowed me to photograph the pages of his sketchbooks so I have a wealth of material to come on the Searle Tribute blog . . . 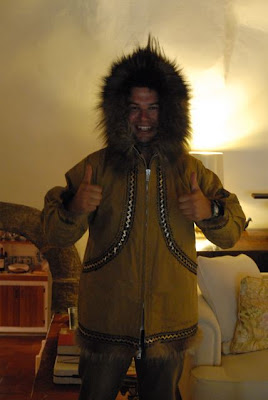 I could never have predicted dressing up like an eskimo in Ronald Searle's lounge!
Posted by Matt Jones at 9:26 am

WaaAAAAAAAAaaaaooooooooowwww
fantastique!!!!
Thank you Mr Matt for sharing with us this precious moment.
Say hello to the team for me.
miss you

ps: you look grand as an eskimo ;)

Man, you get around! Jealous. Great post tohugh, looking forward to what comes up next.

What a thrill. I'd love to be holding that setchbook. Searle is a master. Lucky you

Is Uli holding one of Mr. Searle's sketchbooks in that photo? Must have been something looking at all of those originals.

Thanks for sharing the story with all of us.

Yeah-Ronald had pulled out 2 sketchbooks for us to see-knowing our interest in film & animation he showed us the books he filled on the sets of 'SCROOGE' and 'MONTE CARLO OR BUST'. I tell you, it was mind-blowing to see these! Searle permitted me to photograph them & I tried to get as many pages as possible. I'll put them up on the Searle blog in due course. He told us they were 2 of FORTY sketchbooks he has! We were itching to see more . . .

My lord. I still haven't gotten over your last meeting. What a wonderful treat.

My God, what an AMAZING visit! To not only meet the man and his wife, but get to look through his sketchbooks! And what totally fasvinating conversation you had. I can't wait to see the sketches...

When you said Nice was nice I wasn't expecting this...I have a feeling I am struggling with...I think I might be jealous?

Brilliant, good on you guys and good on them guys. Sounds like a great way to spend a day. Brilliant, I'm sure the Searles enjoyed it too

your drawings are so powerful and expressive
my compliments
:)

Bloody massive (I've been thinking of a better way to say it but couldn't find one).

Fascinating! Many thanks to you for taking the time to share it with us. How amazing to get that UPA Magoo cell as well... jealous :)

Wow! Im jealous!!;) Thanks for posting this!

Hey matt, sounds like you had a great time. Catching up on you blog is always a treat

Thanks for the comments everyone-you can read more about this great afternoon with the Searles over on my Ronald Searle Tribute blog.