Last weekend I saw 'pop-opera' 'MONKEY:Journey to the West' at the Theatre du Chatelet, Paris. It's certainly a grand spectacle with dozens of Chinese acrobats throwing themselves around the stage & Jamie Hewlett's impressive set & character designs. However I felt the piece lacks narrative cohesion. Sang in Chinese with French subtitles made it harder to follow but I could ascertain that there were huge story leaps with no set-up or payoff. The characters simply journey from one set piece to another, while the Monkey King himself is played as an annoying, ball-scratching chav in a yellow track-suit!
The Paris run is sold out & the production moves next to Berlin.


There are a several animated 'projections' during the show-I assume these were produced at Passion Pictures or perhaps Hewlett's studio Zombie Flesh Eaters were responsible? 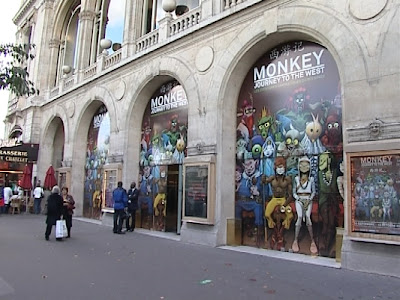 Alan Yentob did a programme about it a few months ago when it played in Edinbrugh (how do you write edinbrugh?). I must say, i wasn't really impressed. Albarn and Hewlett are talented, but it is hard to like them, because they come across as such twats (especially Albarn)
I always liked hewlett, but his perfectionism was a bit unfounded sometimes. For example. He did ONE design of a dragon (coming out of the air, eating a character). It was to be made into a huge puppet. He was so arrogant to the people, saying that the puppet didn't look like his design at all! But what do you expect with a drawing from only one angle! I couldnt stop thinking: why didn't he just draw a turnaround modelsheet then, instead of throwing a tantrum now?
I think I'll give 'Monkey' a miss.

I saw the first minutes of that programme on YouTube-thanks for relating some of the rest -I thought the sculpted elements of the show didn't really look like Hewlett's style-if it wasn't for his painted backdrops there would be little to indicate his influence on the design.
I've seen Hewlett & Albarn on TV before & yes, they do seem act like 'student tossers'! However both GORILLAZ & MONKEY are very interesting musical collaborative efforts. Albarn is undoubtedly a talented musician & he has opened up Chinese opera to a new audience. The audience I saw it with enjoyed it thoroughly-young kids to oldies & the 'shop' was selling Hewlett designed merchandise like hot-cakes after the show.

Is this show coming to London?
I saw Yentob's programme on Albam and Hewlett and I'm pleased to see these guys NOT tavelling the usual road.
Gentlemen, please stop making sense
.... That means you.

The show was actually commissioned by Theatre Chatelet in partnership with the Manchester International Festival & the Berlin Staatsoper. It ends in Paris today! (13th Oct.) then heads to Berlin next July. Doesn't look like a London run is on the agenda.

How do they have subtitles in a live show?

Operas often have a subtitle display box way above the audience at the top of the 'proscenium'. It's kinda awkward to have to follow the on stage action & keep an eye on the subtitles.
At the Cannes Film Festival I saw foreign movies with French subtitles on-screen a similar 'display box' just beneath the projection screen with English subs!

I went to see the show because of the contribution of Jamie Hewlett and I was quite disapointed: Even if the costumes are spectaculars, they have nothing of a "Hewlett's touch", it could be the work of any good costum designer. And the animations were way to short, and in my opinion not as good as Gorillaz clips. And about the show itself, it had nothing special, it was just chinese circus on a stage ! What I liked best was the poster on the entrance doors...
A disapointement.
Well, it's true that it is interesting seeing artists trying to do new stuff, but I guess it doesn't works every time...