A sequence I boarded from the film was just released online as a pop promo for the song 'La Seine' by Mathieu 'M' Chedid and Vanessa Paradis.

It was with great pleasure today that I greeted the release of the trailer for 'A Monster In Paris'- a film I storyboarded on for BiboFilms between 2006-2008.  It's a sheer delight to see scenes I drew 5 years ago realized so gloriously en trois dimensions! 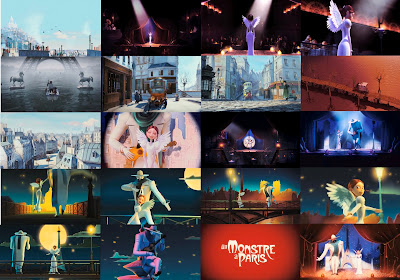 I had the time of my life on this project working with a world class team in the south of France. I can't wait for the world to see the final film . . . I'll be blogging more about the film once it's released.

I can only say, WOW!

Great to finally see some footage and it looks very nice! Where's the English version?

That looks jolly good fun - looking forward to seeing it.

Wow!!! this is amazing!!!! Absolutely amazing! I bet you are proud of you work!

This looks like a triumph! cant wait to check it out. Any news on UK screenings? would love to see it on the big screen...

Je ne comprende pas!! En Anglaise...silver plate. It look's like a Zebe drawing...but from many angles. And there is something else about the design which I can't quite put my finger on...

Thanks for the feedback folks- all of us who worked on this show are so happy to see it finally approaching release and to hear peoples' reactions. I can't wait to see the whole film myself!

Congratulations on contributing to such a beautifully designed film!

Without this project I would never have got the chance to visit Nice and see you in tight black Speedos!

Emile and Darwin: separated at birth!

ohh major kudos, matt! been seeing little hints of it here and there the last few weeks - it looks brilliant. "-))

and yeee-ikes! maybe speedos across the pond have um, a different fan following there than they do here? "-)

My speedos are nothing to be sniffed at!

man this looks beautiful! I hope it has even a small run in over here!

congrats man - i think its gonna be a cracker!

Tomm-thanks for your vote of confidence-the film will not disappoint you!

Looks lovely. Did Bibo write and peform some of songs as well?

Sooo cool that you worked on this!