Sketchbook drawings I've made over the past month or so. 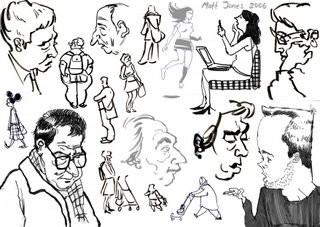 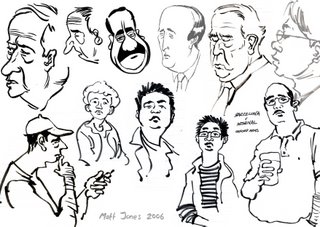 Drew this chap from memory after tailing him in my local supermarket. He was barely more than 5 feet tall & I could only see him from behind but his trapezoids were about 5 feet wide! Mustn't make a habit of stalking bodybuilders . . . 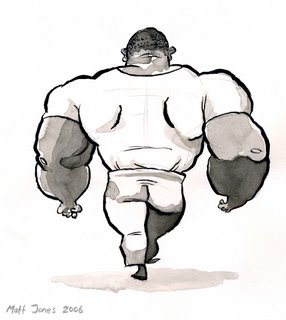 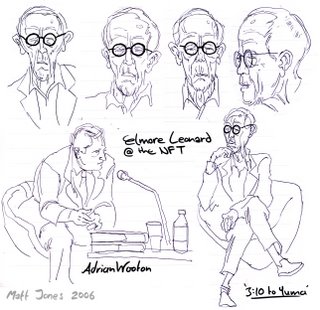 Elmore Leonard recently came to promote his new book at the National Film Theatre. It's a collection of his western stories & tied in with a season of movie westerns at the NFT. Leonard screened '3:10 to Yuma', one of the first film adaptations of his novels.
He told us a remake is in the works with Tom Cruise & Eric Bana.

I'll be in london in 2 weeks, I can't wait to visit the National Film Theatre and more!

Fantastic Matt! I can't tell for sure but to me seems like your drawing skills are advancing at giant leaps lately! Good thing all this blogging I guess. By the way, I do remember some of the people at the ofxord arms in the arsenal-barça match. Specially that poor kid you draw in the center of the sheet. He was strugling to see the match between all those drunken big guys.

Thanks Joan, that was a pleasant eveng in the Oxford Arms, wish I could've stayed for the whole match - SO many characters in there to draw!
I've always drawn this much, but blogging has given me more focus, let me gauge myself as an artist & helped me find an identity with my style.
Seeing all your own work almost chronologically really helps you see where you're going creatively & where your weaknesses/strengths lie.
The feedback comments are good for the ego but rarely give the kind of constructive criticism that would help me progress. It's really about me being objective with my own work & forging ahead. Of course all this bloggong has turned me into a complete anal retard & lost me all my friends, my girlfriend, my social life & my goldfish has died of neglect!

Wake me when this is over.

don't lose your girl friend - i've seen her . - give up drawing now and pay her some attention !
or you could just keep drawing bendy buildings instead ! ( it is a very well drawn bendy building i must add . - constructive critisism - you have positioned the secrevice far too close to the catnic on the second floor . more observation i think is needed .

Thanks Dean, that's exactly the kind of advice I need.

Nice to see new sketches, Matt. I'd love to see some of those sketches drawings as full fledge animation designs. Especially like the third head from the left on the second page. I find it surprising how some sketches are realistic and some just come out as pure caricature when drawing from life.

That guy was actually on TV - he had a really caricaturable face.

here's some constructive critisism: fuck you!

wow, theses are some really great sketches. Makes me wanna print 'em out, glue 'em into my sketchbook and act like it's mine!:D

Awesome collection of drawings!! They produce many of those BIG guys at muscle beach in LA also!

Thanks for the Jamie Hewlett tip. We got a company paid trip to london to see the stuff next week. We gonna also see pixar exhibition...Exited...