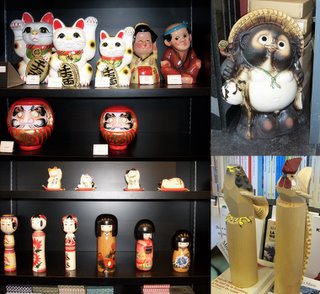 In Paris a couple weekends ago I visited the Japanese Cultural Centre where they were holding an exhibition called YOKAI.
YOKAI is Japanese for 'goblin' & the show featured artwork on paper & long scrolls that depicted goblins, spirits, demons & the supernatural. It was one of the most fun shows I've ever seen & I couldn't draw enough! The catalogue had sold out so I tried to get down as many of these creatures as possible. 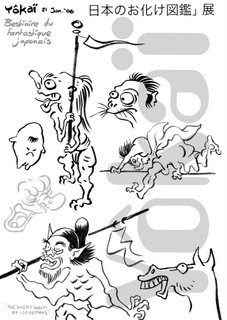 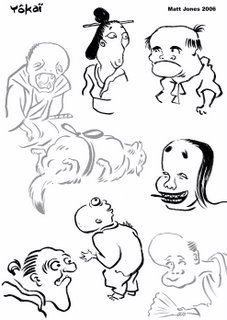 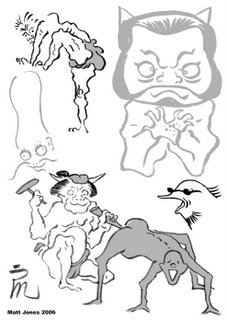 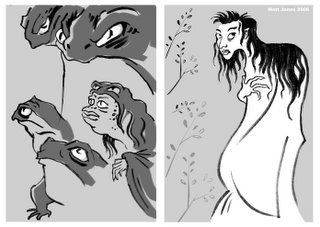 Frogs & toads seem to be held in low regard in Japanese mythology - they're always presented as evil, diabolical or bad omens. 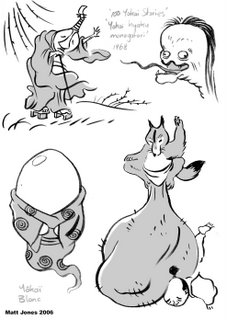 Those really are that squirrel's nuts! He'll have trouble burying THEM this winter!

The exhibition had a trailer playing for Takeshi Miike's latest film 'THE GREAT GOBLIN WAR'. A fantasy film released last year in Japan it was a local effort to create a film similar to The Lord of the Rings but using Japanese mythology. It's aimed at a younger audience but looks mighty entertaining. Should see a European release this year.
There's a great piece on YOKAI in the January section of monsterama.blogspot.com. See also www.obakemono.com
www.mangajin.com/mangajin/samplemj/ghosts/ghosts.htm
Posted by Matt Jones at 7:30 pm

Great thing.
All those legends are allways such a nice fun.
Nice drawings and nice article.

Thanks alberto - glad you found it interesting.

You may be inspired to pen a comic opera now.
You could call it The Mikado.

I left a message about this on Saturday but it's gone!

Anyway the exhibition looks like a fun day out for all the family. I especially like the sculpts of the Eagle and the Chicken. What are they for?

You are the Phileus Fogg of exhibitions, and I doff my cap to you and your talent.

Love your creature darwings!! THey are GREAT!! You capture the accent of the Japanese Myth!! Love the line quality too!

the squirrel's nuts remind me of pom poko!

Hello,
Found this page from a link at The Obakemono Project.

Just wanted to comment that the reason the "squirrel"'s nuts remind you of Pom Poko is because the creatures of the above animation and the "squirrel" in the drawing are actually the same creature: it is a doglike animal native to Japan, called the tanuki, often mistranslated into English as "badger" or "badger dog" in the legends. Tanuki are notorious for the myriad tricks they an play with their nuts, and they're one of my favorite yokai.

I have just watched The Great Yokai War. It's so amazing ^_^ and really make me want to go to Japan as soon as posible. I love your blog. It's so stylish and characteristic !