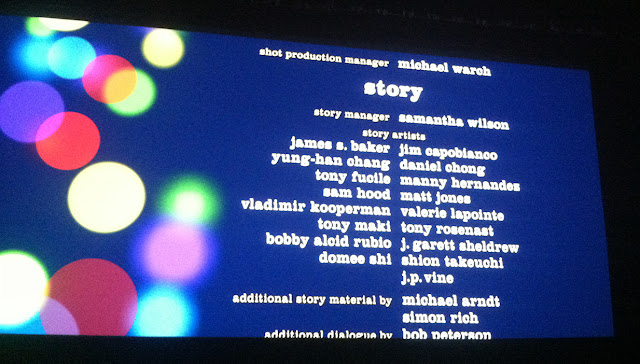 My first credit on a Pixar feature - I worked on this film for the first 2 years of story development. The first team were myself, James Baker and Jim Capobianco working with Michael Arndt. Story Supervisor Josh Cooley joined after he finished work on 'Cars 2'. Sam Hood joined the team with Tony Rosenast, Valerie Lapointe and Domee Shi. Shion Takeuchi came on board after she finished on 'Monsters University'. Garett Sheldrew rounded out the 'first wave'. I remember Emma Coats joined us briefly before leaving.
We worked initially with Michael Arndt before he went off to write 'Episode 7'. After Pete, Ronnie and Jonas took a trip to NYC to go behind the scenes of Saturday Night Live they invited staff writer Simon Rich to join us. He left SNL and worked at Pixar for a year or so. Arndt and Rich were fascinating collaborators and really liked working with Story Artists.
Meg LeFauve came on board with the 'second wave' of artists; Dan Chong, Yung-Han, Tony Maki, Vlad  and Tony Fucile helped out before he joined the animation dept. to consult on the character posing and do draw-overs. 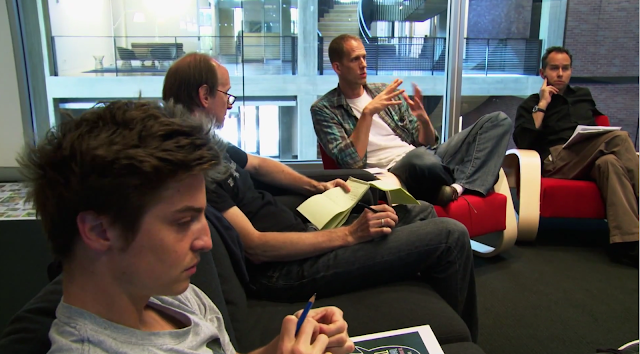 Bill Hader in the story room.

Pics from the wrap party May 2nd Oakland. 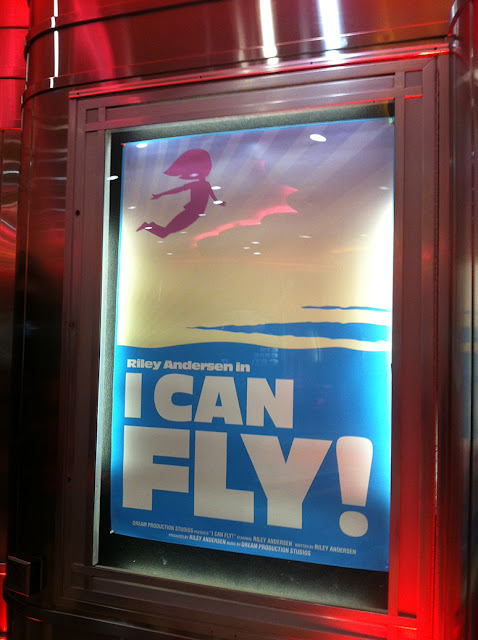 The wrap party was a blast-the Fox theatre had lobby posters from Dream Productions! 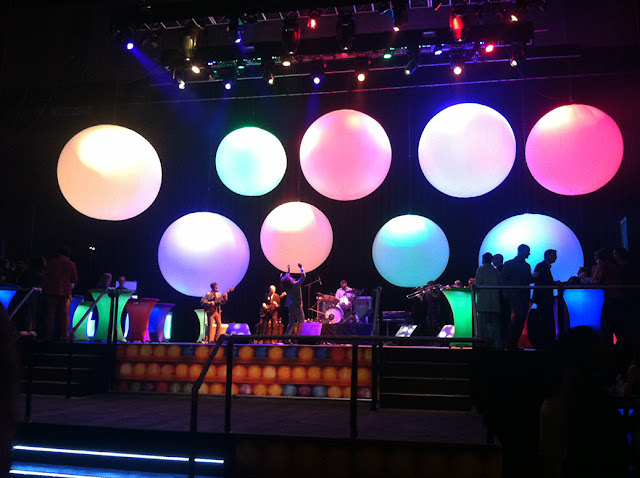 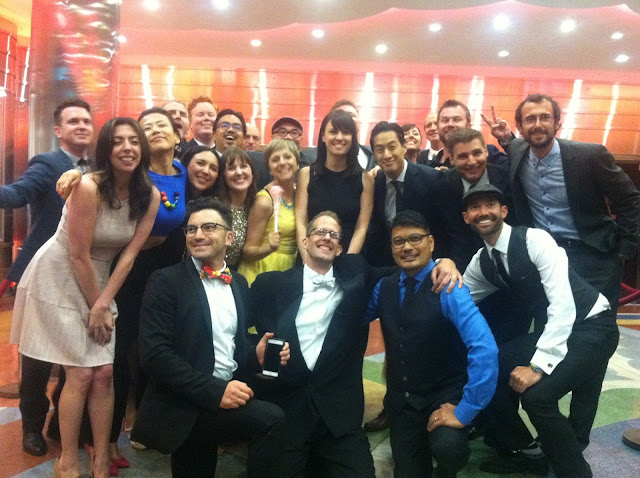 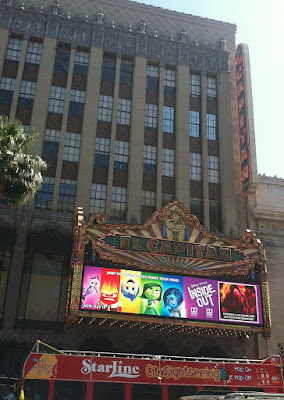 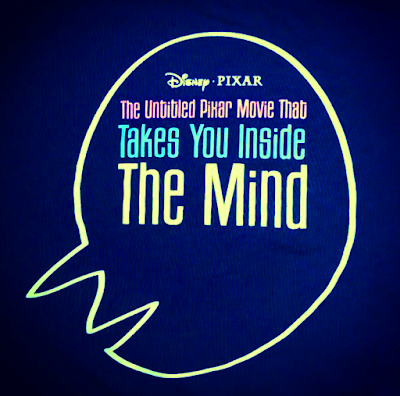 For a long time the working title was 'The Untitled Pixar Film That Takes You Inside The Mind' and crew T-shirts were made with a spoof logo.

Inside the Storyroom. Valerie and Emily work out the plot structure. 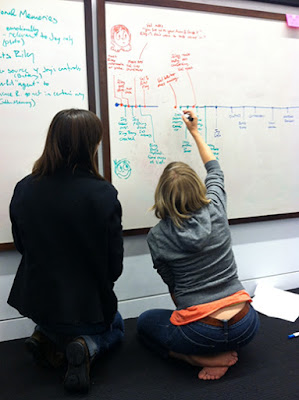 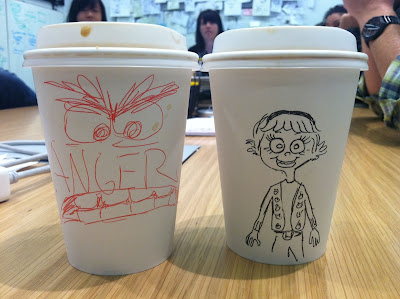 Pete Docter wanted those of us who were 'newbies' to see the 'Hidden City' café in Point Richmond. This is where the historic lunch happened where the first film ideas were dreamt up. Sadly the place closed down not long after- fittingly to reports of a rat in the kitchen! 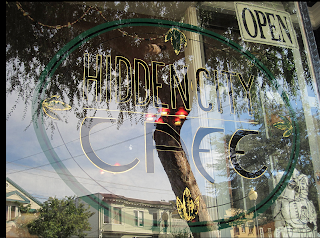 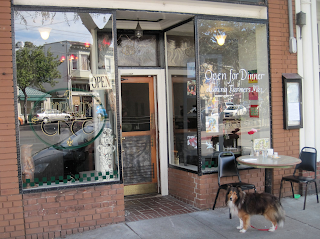 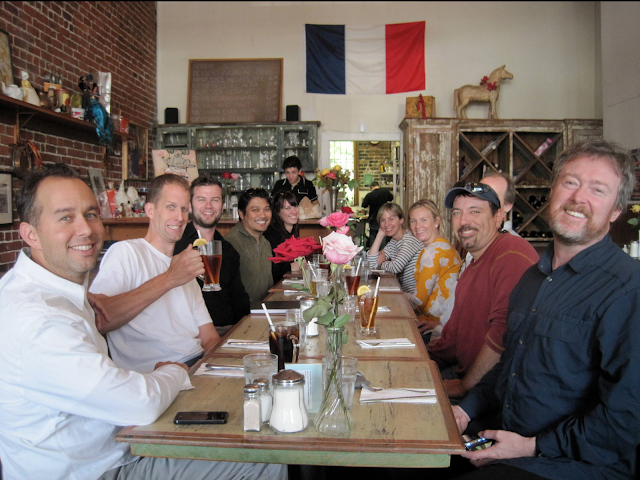 
I tried to brainstorm an idea for a film at the very table where A Bugs Life, Monsters Inc. and Wall-E were conceived! 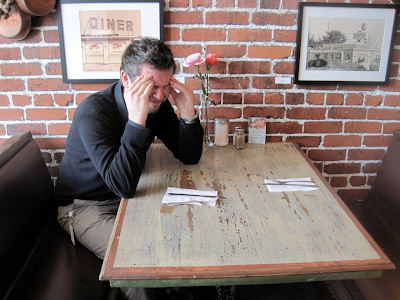 Being permitted to observe Pixar's fabled 'BrainTrust' sessions on 'INSIDE OUT' (believe me, we often pitched 'BrainTrust' as a title for the film!) was an honour and a privilege. Although at times frustrating; Bird or JL would often make suggestions that the Story team had been banging on about for 6 months! Stanton was preoccupied with JCOM in the early days of 'Inside Out' so wasn't present at the first BrainTrust sessions. But it was fun to watch him get worked up on later occasions. If you weren't at 'the' table you had to sit along the wall, listening not talking. Delicious lunch buffets would be put on and those in the second tier without the benefit of 'the' table would awkwardly eat off our laps. This was the 'long' table before Ed made it square. Inevitably sketches were made amongst the note-taking. . . 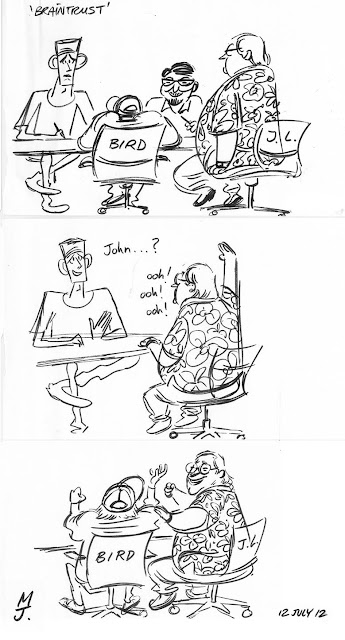 Congrats Matt! Such a great story, enjoyed every second!
Thanks for being one of the people involved in bringing Inside out into this world! Inspiring as always!

Congratulations Matt, that must be a very nice feeling, seeing your name in the credits...
Love your blog.

Congratulations Matt, that must be a very nice feeling, seeing your name in the credits...
Love your blog.

Thanks fellas! It's fun to see the film finally finished and out in the world after 5 years.