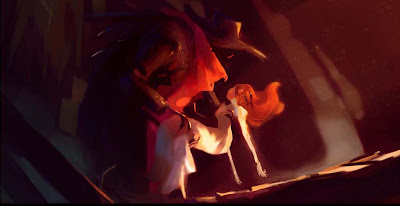 The Galerie Arludik in Paris has a special UN MONSTRE A PARIS exhibition running. For a taste of the incredible artwork created for the film check out the online gallery


I'm so excited that the release of A MONSTER IN PARIS is imminent! It hits cinemas in France on October 12th. I'll miss the crew screening although I hope to see it soon after. 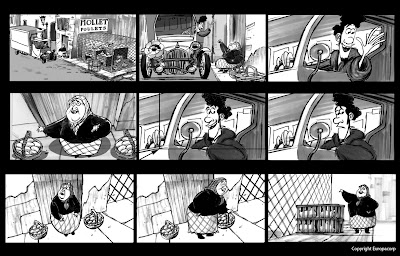 Here's the first interview with Bibo (en francais) with some new footage, behind-the-scenes work and some of my storyboards. I hope to post more boards once the film is releasd on dvd, until then I'll post officially released artwork on English and French blogs dedicated to the project. 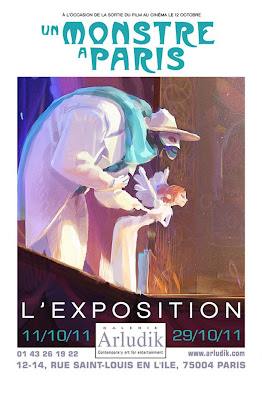 One of my old favourite Parisian haunts, Galerie Arludik, will soon be hosting an exhibition of some of the amazing artwork that went into the making of the film. The poster features one of Aurelian Predal's superb colour keys painted over a Story sketch by moi!
Posted by Matt Jones at 12:34 am

Labels: A Monster In Paris, Storyboards, Un Monstre a Paris

Dude, i´m a big fan of yours!
cheers!

wow! this is very nice! You're great!

Matt, I truly hope that you can get some time away so that you can attend the premiere or the gallery show. And needless to say we have to get a MOVIE POSSE together to see this baby when it comes to town!

Too many blogs to choose from! Is this the main one??

ohhh! this would make SUCH a lovely excuse to fly to paris that week!

Love this matt!!
I really wanna make it over for the show at Arludik!!
Like always, wonderful work by you sir!!
Cant wait to see more!!
Really looking forward to seeing the film.... the anticipation has been driving me crazy!! Ever since i saw Bibo's promo's back in Annecy in 2007, i have wanted more!! I'm sure it will be worth the wait!!

(PS, its also really interesting to see another artist work over the top of your drawings in colour- really helps bring them to life... Beautiful colour pallet too!)

Hope you are keeping well and life is treating you good in sunny san fran!
I have a booth again at this year's CTNx, so if your gunna be around, will be ace to see you! Go for a drink and a bit of a catch up :)

Like always, Great work sir! Please continue to keep inspiring us all!!

Hey thanks for all the comments folks-glad to see there are others anticipating MONSTER'S release as much as me! We made the film in English so technically that is 'la version originale' while the French is dubbed! SO, although the lip sync won't quite match I feel the film will be better in French, especially the songs. While living out there I saw Ratatouille in French and it worked so much better than the American version! The French release blu-ray will be the ultimate edition :)

Hope to see you around here one day Monsieur Matt.

It looks fantastic! Can't wait! Hope to catch you next time you in the UK.

Saab 900 Turbo
ur blog is really nice and interesting, You have maintain it so beautifully that I truly like & enjoy it