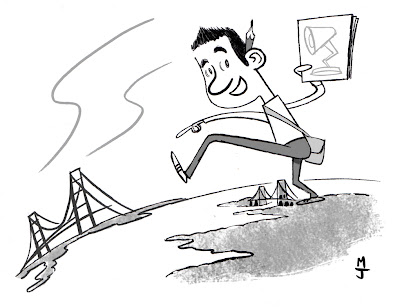 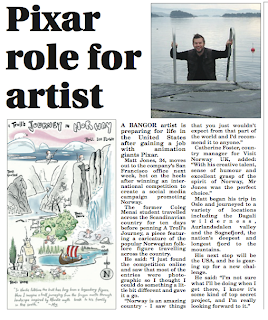 That's going to be an amazing experience for you. Good Luck for the future.

First off congratulations Matt! If anyone deserves it, you do. You have so much damn talent. This blog is about to get a hell of a lot more followers too. :P

Fifteen years eh? That seems to be the going rate in term of "years trying to get in." Was the same for Hartline and a few others I know of.

Hopefully I'll meet you there some day :)

Matt! That's fantastic news! Congratulations on the new job and good luck! Looking forward to seeing more of your art soon - even though I'm sure you'll be busy as!

Fantastic news - well done - I'm sure you'll have a blast. Loads of new places to draw too. Looking forward to reading about your adventures.

Congrats again, and can't wait to see what you think of San Francisco. It's quite different from Europe.

Congratulations indeed! Being paid to play is one of life's greatest joys.

Are you going to Bangor or just kiss?

It's a terrible joke but it makes me laugh.

So this is really it. It's farewell but not adieu. All my best wishes go with you on your new adventure. At least we have cyberspace to communicate.

We tried everything to make you stay, we even traveled to wales and signed for your visa whilst you were out of the country.

Brown Cheese, The North Star and The Spread Eagle will never be the same again!! I'll miss you.

So long Ol' bean- Boris is still threatening to visit, maybe we can crash at your new I-Pad.

Congratulations, you've got many talent!!!

How fantastic and inspirational! I'm sure you're extremely excited, and I'm proud of you being from England!!!!

Huge congratulations!! Pixar is the absolute top the the tree.

Fantastic news - and to answer Owen's comment, yes we at Glamorgan are extremely proud.

...and what with the beard an all you are beginning to look like a young Chris Webster!

Peace,
Mary Lou 'LuLu'
Would love for you to visit my blog, and comment on some of my art when you have a moment or 2!
www.lulu-too-beaucoup.blogspot.com/

Thanks for the encouragement & support everyone-see you in SanFrancisco . . .

Aw, Congrats! I'm sure you'll be a shoe-in, you're very talented. Good luck with your move and up in coming projects. Nothing but the best! :D

I love it when artists like you post about new jobs, and you can see their improvement and the long journey they had to take in order to achieve their dreams.

This is the kind of post that gives me so much inspiration. I am so happy for you, even if I don't know you, and wish you all the best.

Good for you! You are going to love it!

Love that drawing of Cobh harbour by the way - absolutely gorgeous.

Congrats man, you're very talented and deserve this opportunity!

LIBRABEAR said...
This comment has been removed by the author.
2:23 pm

Its a bit late, I know, but congratulations, the story dept just had a power up.