Now HONEYSTARS has aired I can finally post some of the artwork that went into the making of the 2 new spots last autumn. The agency wanted to update the look of the whole campaign this time so I started to re-think the design of the kids first. To appeal to kids I basically thought of the INCREDIBLES crossed with Natalie Portman's white suit in ATTACK OF THE CLONES. These are my exploratory thumbnails. 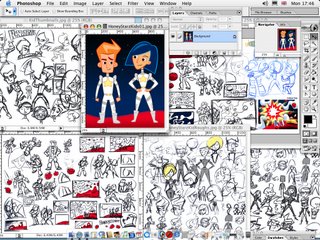 Instead of the usual 'cereal kid' I tried to make them look more rounded, almost like toon-shaded CG. 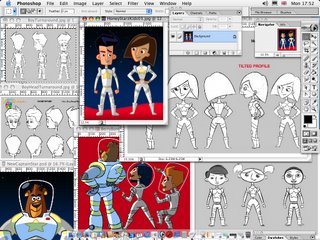 I also refined the look of Captain Star & made his costume a bit more sleek. Captain Star (bottom right) poses by Dean Roberts. 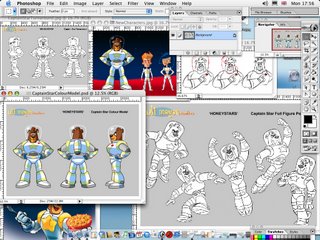 The villains in this ad were fun. Robotic bird-men. I was inspired by the clockwork owl in CLASH OF THE TITANS & Woody Woodpecker. 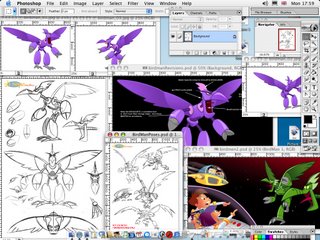 The birdmen & the spaceships were translated beautifully into CG by Joan Cabot & Leo Sanchez. 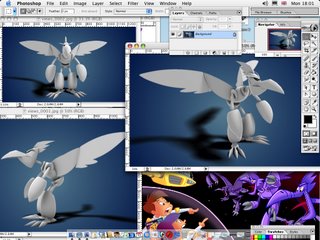 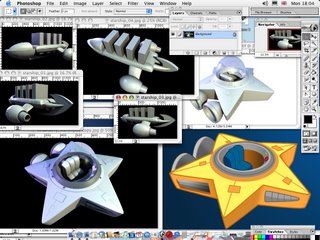 Finally some colour keys I made to guide the production company in Malaysia. The overseas crew were supervised by Andreas von Andrian. The ad was laid out here in London & directed by Uli Meyer. 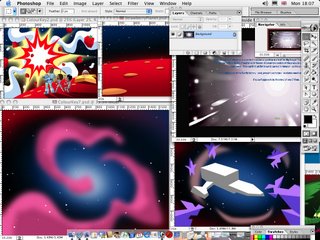 This sculpt of the boy was made to aid the animators. It was sculpted by the highly talented Cako Facioli who promises me he'll have a blog soon. 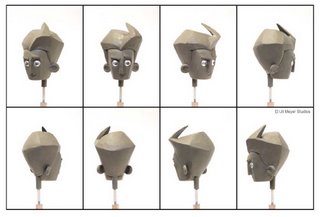 Hi everybody! I'm back on the blogging scene and if you want to link me that's where I am. http://umbackagain.blogspot.com
Uli Meyer

Matt, what an inventive way of showing your stuff! We like the way you put up the screen grabs...the designs are cool, especially the villains and the space vehicles. Great stuff all around!

That is a great way to present your work. Looks like you get some fun projects coming through the studio. Is there a link to see the spot?

The birdman design is aces!

Thanks all, Honeystars is indeed yummy cereal for the world's children. This particular ad pushed a strawberry flavoured variant on the regular 'recipe'.

I don't believe the ad is online yet, perhaps we'll get it up on Uli's studio site?

Yeah, we just couldn't change a design that worked so well already, I just took all the detail off the cozzie & simplified the jet-pack.

hey matt fantastic design but i am blown away by the action poses of the bear on the 3rd screen grab . really dynamic ( they have a real french ,almost parisian feel to them !) where do you get your ideas from .