. . . a bunch of French schoolkids! 'Entre les murs' is the first French film to win the top prize in 20 years & it was great to see the kids getting to be stars for a night. It was an appropriate choice for a subdued festival with most films in competition focused on social issues. My favourite films were two terrific documentaries-'Tyson' James Toback's portrait of the troubled boxer & 'No Subtitles Necessary: Laszlo & Vilmos'-the riveting story of the great cinematographers Laszlo Kovacs & Vilmos Zsigmond who escaped the Russian invasion of Hungary & became the D.O.P.s of choice for the new Hollywood of the 60s & 70s.
But where is my prize for surviving Steven Soderbergh's 4 & half hour biopic of CHE? 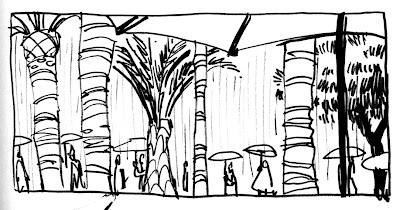 It continued to rain all week. Sales in the film market were reportedly just as poor as the weather & most execs were packing up by Friday & heading home. 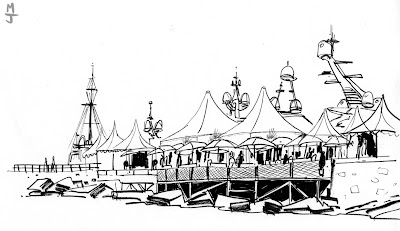 There was one sunny day on Thursday so I skipped a screening & spent the afternoon drawing on the 'festival only' beach behind the Palais. 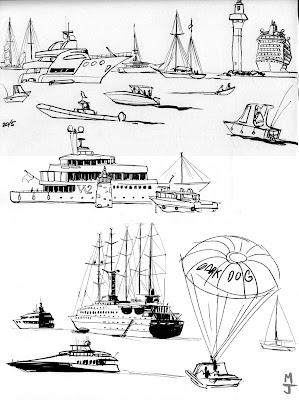 The yachts that drop anchor in the bay & the port are unbelievable. Just as you think you've seen the biggest boat ever built an even more immense vessel sails into town! There was one bigger than the car ferries that go to Corsica-up on the poop deck there was a rock band performing on a concert stage. 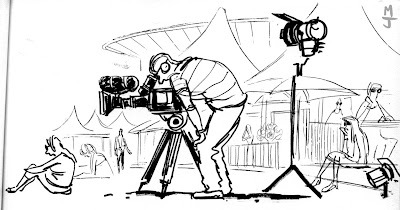 The chap above was shooting my favourite film critic Mark Kermode reviewing movies on the beach. 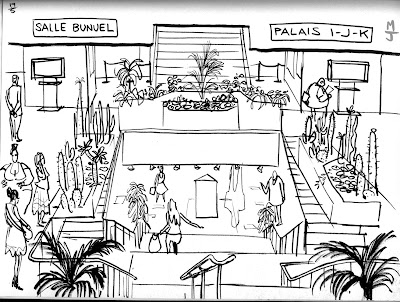 The main hall of the Palais des Festivals. 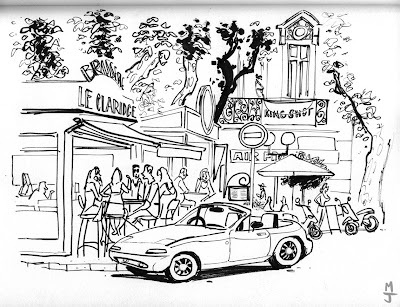 Views from the café terrace. 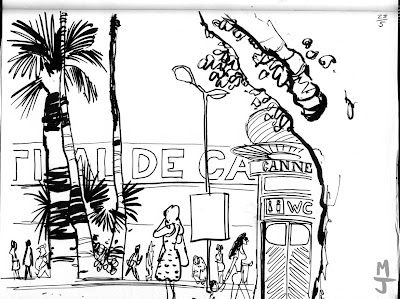 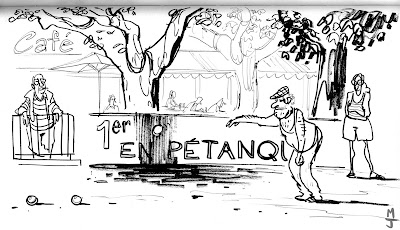 Some of the freaks,geeks & nutty folk who make the festival such fun. 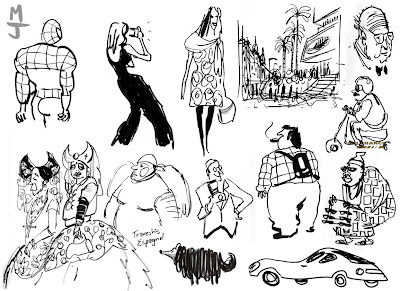 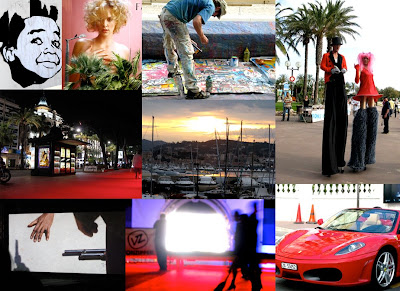 Wow. Just wow.
I recently stumbled on your blog, and absolutely love the stuff here. As someone who is attempting to do more location sketching, your stuff blows me away. Fantastic work, will definitely check back. Come visit my blog if you feel so inclined!
Can't wait to see more.
R.

HEY just discovered your blog! pretty good life drawings i do need to do a little more of that

Nice work Matt. What kind of pens do you use?

Tell us more of this Che film please, Matthew.
I'm not really interested in the subject matter but Steven Soderburgh is usually an interesting film maker.

Randeep- thnx for the goodwill. Can't seem to access your blog however

Elliot- you can read my thoughts on the picture & others over on my cinema themed blog miseenscene101.blogspot.com

These are adjectivally good Matt.
Unlike you frivolous young flbbertigibbets I look forward to dozing off durng epic CHE.
Ay sign of the El Fandi film? I think it was supposed to be at Cannes...Or was it last year?

n
and an n

Merci Limbolo. No sign of The Matador film but I read somewhere that MANOLETE is finally due to be released in successive European territories later this year. Such a long time on the shelf doesn't bode well.

These are cool drawings man. Lots of atmosphere.

i'll send you a basset hound "daphneylan" t-shirt if you want.