Leaving Bilbao we started heading south towards Madrid.  We stopped in Burgos to see El Cid's tomb in the cathedral. 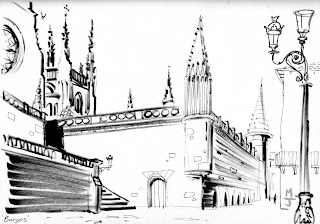 Continuing south a slight detour to the west took us to see the impressive Alcazar of Segovia. 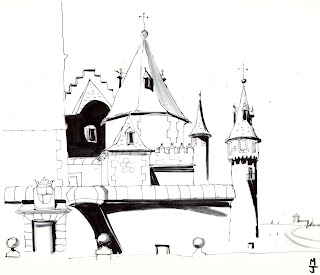 Next day we hit Madrid where we would find our quarry-Picasso's 'Guernica'.  However the museo Reina Sofia was closed the day we arrived so we had to spend an extra night at Madrid's one & only campsite sweating in our stuffy tents.  We passed the evening exploring some of the city's exotic watering holes. 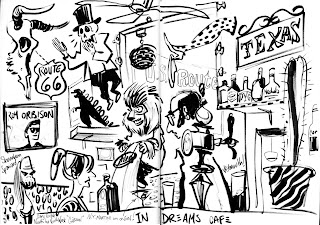 The morning after we went went back to the museo Reina Sofia and finally clapped eyes on Picasso's masterpiece!  In printed form I'd never noticed the bird painted in between the bull and the horse. 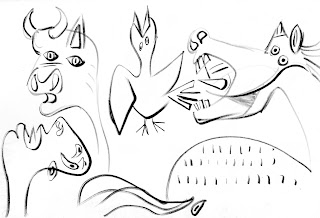 I felt I had to make a study of the painting so tussled by hordes of Korean tourists and Spanish school kids I made the sketch above. 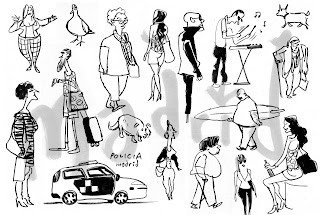 After Madrid we headed west into the vastness of Castille la mancha.  We didn't see any Quixote style windmills but we passed literally hundreds of the modern turbine type.
We were heading straight across country to Barcelona but a friend was visiting Zaragoza to the north so we took a sharp left turn & headed up into Aragon to meet him. 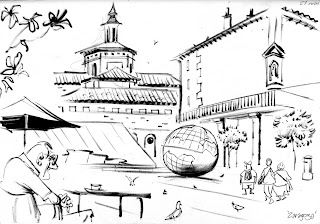 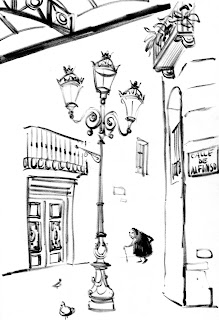 I like the little old granny. They are everywhere in Spain but not as many as before. Now they wear track suits.

These are really fun and fresh, Matt!

brush pens are the best for travel! I love the old woman with the cane behind the lamp post. Enjoy your travels!

Thanks folks, I found a brushpen that was beginning to dry out allows for more impressionistic mark making-allowing for quicker on-the-spot sketching.

Are you still in UK?

Yes Andrei, bu off to Norway tomorrow!
I'll catch up with you when I get back.

hi Matt! Hope you're doing well.
It's been a long time...sorry!

Wonderful as always - looking forward to the Norway edition.